A Discovering Diamonds Review of The Captain and the Theatrical by Catherine Curzon and Eleanor Harkstead Reviewed by: Anne Holt 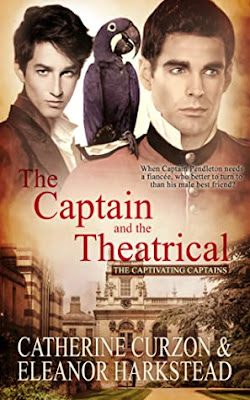 "Ms Curzon and Eleanor Harkstead are experienced, reliable writers who know how to write a good story"

“When Captain Pendleton needs an emergency fiancée, who better to turn to than his male best friend? After all, for Amadeo Orsini, life’s one long, happy drag! Captain Ambrose “Pen” Pendleton might have distinguished himself on the battlefield at Waterloo but since he’s come home to civvy street, he’s struggled to make his mark. Pen dreams of becoming a playwright but his ambitious father has other ideas, including a trophy wife and a new job in America. If he’s to stand a hope of staying in England and pursuing his dream, Pen needs to find a fiancée fast. Amadeo Orsini never made it as a leading man, but as a leading lady he’s the toast of the continental stage. Now Cosima is about to face her most challenging role yet, that of Captain Pendleton’s secret amour. With the help of a talking theatrical parrot who never forgets his lines, Orsini throws on his best frock, slaps on the rouge and sets out to save Pen from the clutches of Miss Harriet Tarbottom and her scheming parents. As friendship turns into love, will the captain be able to write a happy ending for himself and Orsini before the curtain falls?”

The back cover blurb, above, sums the entire story up very well. This is romance at its best, as long as the reader is comfortable with gay romance. Ms Curzon and Eleanor Harkstead are experienced, reliable writers who know how to write a good story, and are very capable of handling what could, to some, be a sensitive subject.

I was also interested in the fact that the story was set in Regency England – one tends to think of gay relationships as being set in Ancient Greece or Modern Day (which, of course they aren't!).

There is the romance, the mystery, the superb characterisation and a subtle twist which I did not see coming,  And the parrot… I shall say no more!

Not necessarily ‘historically accurate’ for those who insist on the nit-picks of facts -  but certainly a thoroughly delightful and entertaining read.