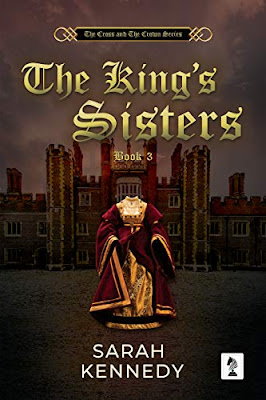 "It was refreshing to read a Tudor novel that was a little different to the usual run of books about Henry VIII's various (usually tragic) wives."

The Cross and the Crown Series Book 3

"The King’s Sisters continues the story of Catherine Havens. It’s now 1542, and another queen, Catherine Howard, has been beheaded for adultery. Although young Prince Edward is growing, and the line of Tudor succession seems secure, the king falls into a deep melancholy and questions the faith and loyalty of those around him. Catherine has found herself in a unique position as a married former nun. Now she is a wealthy widow. She has two children, a boy who has successfully joined the young prince’s household and a daughter who lives with her at Richmond Palace, home to Henry’s cast-off fourth wife, Anne of Cleves, now designated 'The King’s Beloved Sister.' Catherine also enjoys the attentions of widower Benjamin Davies, and in the festive court atmosphere, she has furtively indulged her passion for him. But England has changed again. Anne of Cleves hopes for reinstatement as queen—until questions arise about the finances of the houses she keeps. Catherine, as one of the king’s 'reformed sisters,' is singled out, just as she realizes that she is carrying a third child."

It was refreshing to read a Tudor novel that was a little different to the usual run of books about Henry VIII's various (usually tragic) wives. Yes, this one involves Anne of Cleves, but it is not she who is the central character, and even so, Ms Kennedy has explored an unexpected angle to this set-aside wife. I have always assumed that Anne of Cleves thought herself a lucky woman to have escaped Henry's clutches and the probability of a future axe man - but what if she had wanted her marriage to be re-instated, to be Henry's wife again, not his 'beloved sister'?

This is primarily Catherine's story though, and through her eyes - and her hopes and fears - we (carefully) tread the corridors of Tudor palaces and meet royals, servants and ordinary people going about their daily lives -- and meet them well, for Ms Kennedy's research seems as expertly done as her writing ability.

Henry himself is in his later years, and he has the son he always craved, but the court is yet again in turmoil following the scandal and subsequent beheading of the young Catherine Howard. But Henry's court is still, very much, a dangerous place to be, for there is political intrigue, scheming, treachery and betrayals by the royal throne-load.

I have not read the previous two books, but picked up Catherine's continuing tale quite easily, thanks to the author's skill of including adequate back story.

A recommended read - especial for fans of the Tudor period.