Lady of the Seven Suns by Tinney S Heath Reviewed by: Anna Belfrage 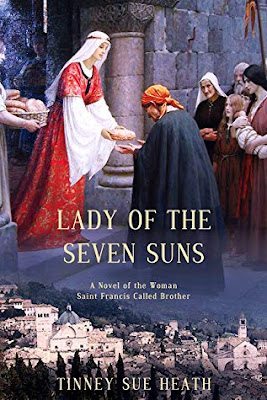 "Giacoma is a wonderful character. Despite the centuries that separate her life from ours, she is totally relatable."

Rome at the beginning of the thirteenth century: a beautiful place, filled with ruins and palazzos, with marble that dazzles in the sun, with well-dressed nobles and merchants that sport reds and blues and greens, drape themselves in impeccable linen and heavy, shining velvet. This is the Rome in which Giacoma dei Settesoli belongs—by birth and by marriage.

Her husband, Graziano of the Frangipane clan is not only rich and chivalrous, he is also handsome and generous and more than proud to have a wife who does her part for the other Rome, the Rome of beggars and stinking gutters, of abandoned orphans and people who have nowhere to go, nothing to eat.

Giacoma gives alms. She feeds the beggars in her home. And one day, when she is at St Peter to give alms and check on “her” beggars, she sees a young man, a man dressed in rich garb who ostentatiously throws every penny he has in St Peter’s grave. Giacoma is more amused than impressed, but when she encounters the young man some time later, this time dressed in rags while the beggar beside him beams in his new clothes, Giacoma realises this young man is more than a popinjay, that he genuinely wants to shed his riches and embrace the life of the poor. The young man’s name? Francesco de Assisi.

A while later, Giacoma loses her husband. She is sunk in black, black despair, and only the surprise visit from Francesco stops her from committing the ultimate sin, she hovering on the precipice of suicide when the young, barefooted man of God somehow bridges the abyss of darkness that surrounds her and gives her back purpose, a reason to live—primarily her two young sons.

And so begins a beautifully depicted friendship, a relationship that starts as equals but soon becomes that of disciple and master, because Giacoma can never aspire to be as good, as tolerant, as devout as Francesco. He breathes life into the gospel, he speaks of a God that rejoices in the little ones, be they children or animals or the poor, he preaches a life of simplicity and prayer, and Giacoma finds it all quite seductive. To give it all up, to be rid of responsibilities and expectations—there are days when this young widow finds that concept very tempting.

Giacoma is a wonderful character. Despite the centuries that separate her life from ours, she is totally relatable. To a large extent this is helped along by Ms Heath’s approach to dialogue – no stilted attempt at having Giacoma speak some sort of thirteenth century lingo, no Giacoma speaks and thinks like we do, and frankly, her concerns are very much like ours as well. Giacoma is well-educated and can therefore offer an insightful commentary on the unfolding events, and as she is Roman, she is also witty and somewhat scathing in her comments. Being extremely wealthy, Giacoma has a fortune to manage—a full-time job in itself. She has children to raise, a household to rule and also desires to find time for spiritual contemplation. Herein lies the fundamental difference between Giacoma’s world and ours: in her life, God is a constant presence—as is Francesco, even when he is nowhere close to her.

I know from past experience that Ms Heath knows medieval Italy. In her last book, it was Florence that sprang to life; here it is Rome. The vibrant descriptions of processions, of feuding families, of Church politics, of rituals and customs has the novel twisting with life, even more so as Ms Heath peppers the text with tongue-in-cheeks. Sentences like “So it was under the protection of numerous armed guards and a holy finger that I would travel to Assisi,” make this reviewer smile. There is an absolutely wonderful scene involving Francesco, a lamb (subsequently named Lotario) and Giacoma’s entire household that has me laughing out loud. And then there are the other scenes, heart wrenching descriptions of human tragedies, of death and loss, that leave me short of breath.

Francesco of Assisi comes alive in this book: a mild and devout man who wants to offer help to those that have nothing, his personal attempt at rectifying the injustices in his world. He burns from within, all too aware that life is short and there is so much to do, so little time in which to do it. His closest companions do what they can to give him the support he needs, but men like Francesco are like a candle: the flame burns fierce and hot, and one day there is simply no wax left. Ms Heath’s Francesco is an idealist. He believes in the inner good in all men and leads by example. His is a life of humility and service, of helping others no matter the cost to himself. And the cost is high—having the Holy Spirit setting you alight comes at a cost.


Other than Francesco and Giacoma, Ms Heath has populated the story with an impressive cast of supporting characters, among which I just have to mention Brother Elias, Francesco’s closest supporter and Giacoma’s very good friend. Without Elias, Francesco would never have achieved as much as he did. Without the presence of Lucia and Amata, the chatterbox and wannabe religious recluse Prassede, the reformed (well…) thief Lapo, Giacoma’s two young sons and her steward Massimo, this novel would have been so much poorer. As it is, we are enveloped in a Roman famiglia, complete with warmth and chaos and squabbles, tears and laughter. And over it all soars the beautifully depicted, utterly chaste, love story between Giacoma and her spiritual mentor, San Francesco. It is a love that burns and hurts, that demands and gives, but it is foremost a wonderful, wonderful thing—even when experienced at a once remove as one does in this absolutely excellent and evocative novel!