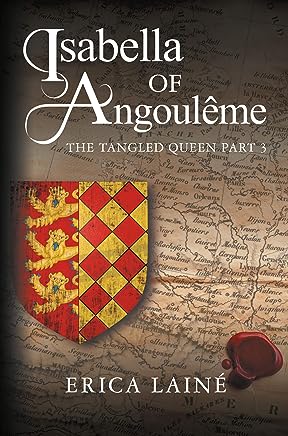 "The writing is quite sublime – so often the scenes are mundane, everyday life, yet they are written with as much enthusiasm the more important passages."

Part three of the story of this remarkable woman covers the last twenty years of her life. In previous volumes we have seen how she became the second wife of King John of England and the mother of Henry III, was not allowed to rule as regent when John died and Henry was a child, she then removed herself to France where she married – controversially – Hugh of Lusignan, Count of La Marche.

Her rejection by the English barons rankled her and fuelled her rivalry with Blanche, mother of the French king, Louis, who was successful in gaining a regency where she had been denied.

In this particularly complicated period of English and French politics, Ms Lainé picks her way through the alliances and betrayals with meticulous care. Her dialogue concerning negotiations is handled expertly. She neither condemns nor glorifies Isabella's part in it all and charts her rapid demise with both care and compassion.

Isabella, in this account, comes through as a woman of immense passion, strong yet human. Her love for her second husband is clear and it is worth remembering that in between all of this, she bore him nine children to add to the five she had with John!

The writing is quite sublime – so often the scenes are mundane, everyday life, yet they are written with as much enthusiasm the more important passages.

This can be read as a stand alone, but I would recommend reading the previous volumes simply because this one was so good.

I recommended the second book of the trilogy for our Book of the Month a short while ago and I have no hesitation in nominating book three for the same consideration.