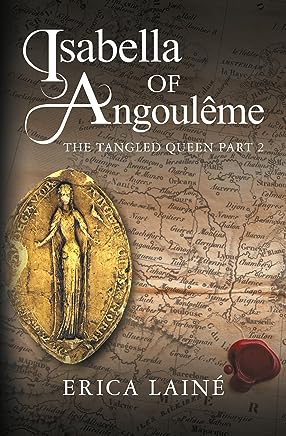 "The author's style is easy to read and places the reader into the minds of the players without complicating matters."

This, the second of a trilogy, covers the eight years following the death of Isabella's husband, King John of England. Isabella returns to France to reclaim her lands but she is determined to do more than that; she wants to make a name for herself and receive what has been promised to her following John's death.

Her daughter, Joan, whom she takes with her, is promised to Hugh of Lusignan but Isabella considers Joan too young for him. Besides, she discovers that she would rather have him for herself. And so here is a lasting love story amid all the political intrigues of both the English and the French Courts. Although the story is essentially Isabella's, the action hops from location to location and person to person. Some readers may find this off-putting but, personally, I did not. It was, for example, an interesting insight to see how a boy king - Isabella's eldest son by John, Henry III - was mystified, confused and frustrated that he had no money or influence even when he reached his legal majority. But he learns as he grows older.

Sticking closely to the facts, Ms Lainé really has captured the times and characterised the main protagonists very well, especially Isabella who is strong and determined. I did also enjoy meeting her 'cousin', the hypochondriac Mathilde. Their relationship to each other gets complicated and is delightfully queried by Mathilde herself! The author's style is easy to read and places the reader into the minds of the players without complicating matters.

I was told that there might be some typos which had since been dealt with; in truth, I only found one – 'La roi est morte' – and I hope that is one of those that has been spotted!

As the second in a trilogy, it is not necessary to have read the first volume (though, of course, it always good to start at the beginning) as this can be read entirely on its own merit. Although there is no cliff hanger ending, I do confidently suggest that the reader will want to get hold of Volume Three.

Highly recommended and a welcome new (to me) character of whom I had no knowledge whatsoever.