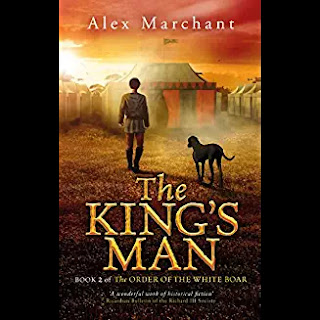 "Although a young adult novel this is an engaging read for adults."

I read the first in this series and was eager to read this, the next. And I’m glad I read The Order of the White Boar because as this follows straight on, there is very little back story included and is therefore not a stand-alone novel.

Matthew has been dismissed from the service of the Duke of York, Richard, brother to King Edward IV. But the king is dead and Richard needs trusted people around him, and right now, that is Matt. Together they ride to meet with young Edward, the new king, but they meet with treachery instead. Arrests and removals follow as Richard fights to regain control of the young king over whom he was named Protector by his deceased brother, but once young Edward is secure in London, Matt must leave Richard's service to join his new household, with the merchant and book printer, Master Ashley. Matt wonders if he will ever see the Duke again, or enjoy his burgeoning friendship with the new King Edward, but it becomes clear that nothing is certain in the world of politics where the new king is a powerless child and more than one faction eyes the throne.

This instalment covers the period from the death of Edward IV to the initial aftermath of Bosworth. More time and words are given to the part that is closest to Ms Marchant’s heart - Richard himself. In the scenes where Richard is present, time slows and we have the leisure to study him and enjoy him, get to know him intimately. This is where Ms Marchant's passion lies, in Richard, in demonstrating that he was not evil or cruel, but wise, deep feeling, kind, and ultimately a victim of grasping nobles taking full advantage of the mess left behind by the rapacious, irresponsible King Edward IV.

I feel this volume depreciates somewhat because Ms Marchant has written herself into something of a hole by splitting Matt and Richard so early in the story and anything that doesn’t involve Richard is less engaging. Matt covers the space of several months in the turn of a page, and events become episodic rather than a flowing action-packed narrative. However, once we reach Bosworth Field, all that is forgotten as Ms Marchant is back to her best. She uses the latest knowledge on what happened to Richard afterwards, to build a plausible version of events, and true to her heart, he isn't alone and friendless at his hasty burial at the church of the grey friars in Leicester.

Although a young adult novel for younger readers, this, as with The Order of the White Boar that came before, is an engaging read for adults, for any who want a good story with none of the graphic gore of battle or overt sexuality, and yet come away with a good sense of the momentous events of this period.