The Slow Death Of Maxwell Carrick by Jan Harvey 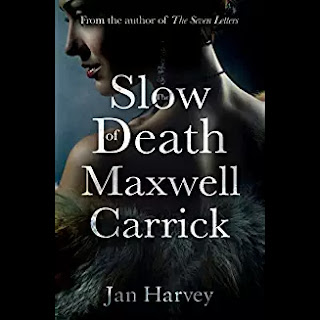 "This a very accomplished book which I thoroughly enjoyed from start to finish."

Retirement doesn't suit Martha Nelson; she is restless and can't settle. A local newspaper advertises for help with a project of a coffee table book on local history. With her background in journalism, she offers her services, but her editing skills are not appreciated by the typically dyed-in-the-wool village committee. Nevertheless, she has become intrigued in the story of the ruined Lapston Manor nearby and especially in the story of its last inhabitants.

In the meantime, going back seventy or so years, we meet Maxwell Carrick (always referred to by his surname) who was one of those inhabitants. Taken in by the then owner of the Manor, he is accepted by Henry, George and Alice as part of the family as they all grow up together. War breaks out and Henry is reported missing presumed dead and Carrick is invalided out of the army with a severe case of stress. It is at this point that the mysterious and enigmatic Cecile Roussell enters their lives and changes everything for them.

This a very accomplished book which I thoroughly enjoyed from start to finish. Carrick is clearly disturbed, almost to the point of dislike; Cecile  is an accomplished seductress. It is easy to imagine the impoverished state of the Manor and the glory that it once was. Martha is dogged and determined, though her husband Steve is less than impressed with her preoccupation with the story she is trying to chase down. And then, into her life, comes local horticulturist Rory.

Once I had got used to the hopping to and from Martha's life and Carrick's story, I became completely hooked and found myself really caring for both Martha and the beleaguered Carrick. The prose is very good without being overly descriptive – less is more –  and the dialogue totally believable in both eras. Although there is the inevitable 'fortunate coincidences' that are present in all mystery stories (“Well, you're in luck – he happens to live in the next village” sort of thing), there are a number of very unexpected twists which for this reviewer were not implausible. Given that this is quite a lengthy read, it is commendable that I came across only two, obviously overlooked, typos ('where' for 'were' and 'roll' for 'role').

Though the background to the cover was quite dark, it made me think 'mystery' before I had even started reading it.