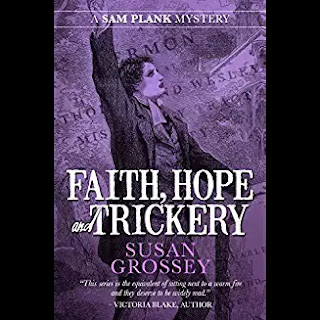 “Rose Welford, the wife of a bootmaker, is smothered in her bed in the summer of 1828. Her husband quickly confesses to the crime, claiming that a message from beyond the grave told him to do it. At ever more popular gatherings in fields, factories and fine houses, a charismatic preacher with a history of religious offences seems to be at the heart of it all – but who, and what, can be believed when fortunes are at stake? In this fifth novel in the series, Constable Sam Plank is drawn into matters beyond his understanding when his wife Martha hears a message of her own and his junior constable Wilson makes a momentous choice.”

I love Susan Grossey’s Constable Sam plank mysteries, and I am not ashamed to admit that I leapt upon this fifth installment when Ms Grossey offered it for review. One of the perks of running a review blog is snapping up your favourites!

What particularly appealed in this one, Faith, Hope and Trickery, was the subject matter of ‘messages from beyond the grave’. I know two mediums who are, in my personal opinion, legitimate and ‘kosher,’ but I have also come across the charlatans – the ‘gypsy’ fortune-tellers who no longer want their palms ‘crossed with silver’ but demand paper money and threaten curses for those of us who are savvy enough to not be fooled. These ladies (usually ladies) are very clever at guessing a few starter points then feed in clues and hints for the unwary to respond to. And such happens in this delightful crime novel, with tricksters luring people away from their money in the hope of contacting their dear departed and in this case, also being tricked into murder.

What I like about the delightful law enforcement characters in this series – notably Constables Plank and Wilson – is their ordinariness. They are not superheroes, they do not crack the case in a matter of a quick fortnight, but weeks, months, pass with the crime in hand on-going with other, everyday things, happening in the background. This inclusion of reality easily takes the reader to trudge alongside Constable Plank as he threads his way through the London streets of the 1820s during summer heat through to winter rain, his steady tread always on the trail of  bringing the lawbreakers to justice.

There to support him and young Wilson is Mrs Plank, Martha, who is an absolute darling of a character. Homely, dependable, capable, although in this story (no spoilers!) I could cheerfully have throttled her at times, but then, her frailties are what make her so endearing. She is not perfect, she has her flaws and her uncertain moments just as any real person does. Ms Grossey writes so realistically that I found myself stepping into Martha’s kitchen alongside Sam, and I swear I could smell the delicious  aroma of her baking filling the room around me.

My only criticism for the e-version on Kindle is that there were no obvious line breaks between various scene-hops. This did not bother me in the slightest, but some readers might find the immediate switch from one scene to another a little confusing.

And one other grumble.
Apparently I have to wait until 2019  for Book Six to appear….