A Discovering Diamonds review of Kindred Spirits: The Tower of London by Jennifer Wilson 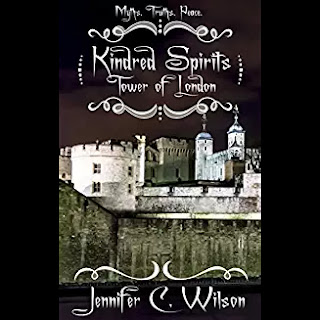 This is not the usual historical fiction that we review but it is charming and does involve historical personages, hence its inclusion by us.

This novel follows the afterlives of the ghosts of the Tower of London, mostly Tudor, but not all. They are all there because something keeps them in the realm of the living, the white light not yet come, or if it has, a choice has been made to remain. Our main protagonists are Richard III and Anne Boleyn surrounded by a motley group of other outcasts of Henry VIII and a few from earlier eras such as Richard's brother George.

This is a delightful tale that is very gentle and quite innocent, and as such it is hard to pin it down to a particular audience. Knowledgeable teens will find as much to enchant as adults. Nothing violent of graphic happens and the pace of the novel is such that it skims along quite quickly and never gets bogged down.

The interplay between Richard and Anne and the way other characters from other eras find friendships is tantalising in the 'what if' of it all, what if Richard and Anne could have met - would they have found a kindred spirit in each other?

The plot is hard to find but when it does reveal itself, is poignant and one can easily see how this novel attempts to continue the rehabilitation of Richard that began with Josephine Tey in her novel, and the subsequent discovery of the king in Leicester.

There are, however two criticisms that can be levelled, and these would only be noticed by some. The first is that in her attempts to avoid massive info-dumps (the bane of the historical author) we are left with far too little information on our characters. We all know the history of Richard III, but the part played by others such as William Hastings are far less well-known and without this knowledge the interactions between him and Richard make no sense. You have to be expert in both Wars of the Roses and Henry VIII to fully appreciate the characters. Yes, once you reach the end there is a useful list of who is who and what happened to them, but this is too late as you need it at the beginning. Of course it would have been nice to have these details woven into the story.

The other criticism is along similar lines but refers to the Tower itself. The descriptions are detailed and show an in-depth knowledge by the author, but unless you have the same familiarity with the complex of the Tower of London, it is hard to piece together the geography. A map, again at the front, would have be so useful.

This is a series and I certainly have not been put off reading the others, if only to see which disparate personages Ms Wilson chooses to throw together and find out what happens. A fascinating idea executed well.