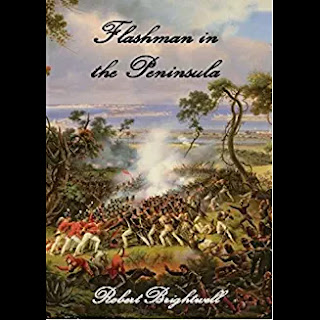 I should begin this review by saying I have never read any of the original MacDonald Fraser Flashman stories, but I have visited a number of ‘Peninsula’ battle grounds and I’m reasonably familiar with the Spanish history side of the Napoleonic war. I also like a loveable rogue, so I was more than happy to read this novel. And to start with I was not disappointed. The story commences in London, where Thomas Flashman ingratiates himself with somebody’s mistress by helping her to create a scandal. The scandal involves gentlemen in very high places and ‘Flashy’ needs to extricate himself p.d.q. He accepts an Army post and gets himself sent to Lisbon to join Wellington’s troops.

The great thing about this Flashman is not that he is a rogue, or even a reluctant hero, it’s that he has a knack of doing the right thing for the wrong reasons. For example, early in the story he saves a man’s life, not because he was brave but because his horse’s reins got caught up in a tree and he couldn’t get away from the enemy himself. At the end of the story – not wishing to give away to many spoilers – he is physically launched into a pitched battle with superior French troops by a group of Irish soldiers, who had noticed him trying to sneak off feigning a wonky leg. Flashman then becomes a genuine hero by slaying a Goliath and saving the day. The battle scenes are excellent: easy to imagine; the blood and tragedy of it all understated but no less real for that.

In all, I was enjoying this romp through history, despite the very pro-British, gung-ho depiction of events, until the middle of the story and Flashman’s involvement with three different women. Brightwell, the author speaking as ‘editor’, makes a joke of British troops ‘liberating’ nuns from convents – one doesn’t need to be told why. And this is Flashman’s attitude to women in general. Obviously the story is set in an epoch and situation where modern attitudes to women did not prevail, but even so, we now see Flashman as a real cad.

The incidents involving a noblewoman (supposedly his cousin), her maid, and the Spanish folk-heroine the Maid of Zaragoza are regrettable. They spoil the story. Humour is elicited from a combination of barrack-room boasting and plain old (male) wishful thinking: the women are dismissed quite literally as sex objects. As I say, very different social mores operated at the time – and Brightwell should have taken this into consideration. I cannot believe that any ladies’ maid of the period would have risked losing her reputation or her place through pregnancy, or have gone against her Catholic upbringing quite so fast as the eager Consuela. Flashman’s treatment of Agustina de Aragon, the Maid of Zaragoza, is excused in the editor’s end notes, but the scene where Flashman ‘takes' her in the cathedral during a holy procession quite frankly besmirches her name. It went too far. It was not funny. Nor was Flashman’s behaviour to his cousin’s husband simply because he is ‘a dwarf’. Yes there were freak shows at the time, they are mentioned in the novel, but modern readers hopefully no longer interpret contemporary attitudes in quite the same way.

A couple of other points that rather lessen the quality of the story-telling, which is otherwise compelling and amusing, is the approach to proofreading and somewhat random inclusion of ‘editor’s notes’. Some sections of the book have very poor punctuation; others are word and comma perfect. Some chapters are followed by what usually goes at the back of a historical novel, many are not.

There is one other point I’d like to raise, and I’ve seen this in other war stories. When a survivor takes stock of an aftermath, how can he know there were (precisely) ‘six hundred and twenty-six’ men injured? When a soldier stands looking out at the enemy, how does he know there are eighty men at the front of each column, or an army of 69,000 mustered on the plain below? Thomas Flashman is relating his adventures in Portugal and Spain as in a memoir, meaning he had access to data later, but it does sound odd when numbers are wielded in the anticipation of battle, or an exhausted warrior lifts his head to find he’s thankfully still alive among precisely six hundred and twenty-six other men.

All in all, however, this is an entertaining story. Brightwell’s premise is that historical fact can be stranger than fiction, which many know to be true, especially historical fiction authors. If you are looking for a bit of easy history wrapped up in an early nineteenth-century wartime romp, then this might be a good book for a chilly weekend. But it’s definitely one for the chaps.