Captain Swing and the Blacksmith by Beatrice Parvin

Shortlisted for book of the month 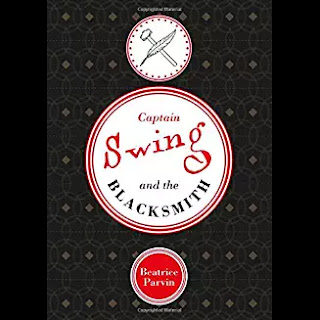 Set in Wiltshire during the 1840s, this debut novel truly brings home the hardship of the people who had to endure poverty which was increased by the Enclosures Act and landowners who reaped the profits while those struggling to survive were forced into the choice of the workhouse or death.

Sue Tindall lives in Amesbury with her drunk of a father. She is a seventeen-year-old laundry presser, who is a first-hand witness to the Swing Riots that took place ten years before. The traumatic memories of the desperate labourers who tried  to increase their pitiful wages still linger with her and her community. Her father is persuaded to produce some threatening notes to be signed by ‘Captain Swing’ and Sue has to sell buttons to earn extra income, but her life begins to improve when she finds a pair of pearl buttons, and the attention of apprentice blacksmith, Jack Straker also seem to promote the possibility of a better future. But Jack abandons Sue for another, and pregnant, Sue leaves Amesbury – and against all odds, has to fight to survive.

Engrossing, beautifully written, absorbing and in places, heartbreaking,  Captain Swing and the Blacksmith is a fabulous first novel, but in addition to this delightful (if haunting) story, the book is accompanied by  a CD which compliments the narrative in the  folksongs of the period. Both are a Diamond of a bargain!