How many of us are tempted to buy a lottery ticket...?*

Sometimes It Happens
a story, based on the novel, especially written for Discovering Diamonds
by
Pauline Barclay

Mr Greedy rolled his eyes and handed Doreen her ticket. ‘Just put your lucky numbers down,’ he said handing over a pen.
Taking the pen she couldn’t think of any numbers in her life that had been lucky, maybe she shouldn’t bother. About to save herself a pound, she looked up at Mr Greedy and seeing his smug expression she scribbled down the only numbers she could think off then handed the ticket back.
‘Good luck, Doreen,’ Mr Greedy purred taking her money.
‘Mmm,’ she said pushing the fags and ticket into her bag, what had she been thinking about, wasting her money on a lottery ticket, she just might as well as dropped the coin down the drain for all the good it would do.
Clutching the birthday card she opened it and read the words inside, she stifled a giggle. A miserable old sod he might be, but as neighbours go on her estate, he was as the card said, a Discovered Diamond.
She tucked the card into her bag and with a broad smile hurried off to work.


A HUGE special thank you Helen for having me here for this special Christmas Diamond Blog and a big thank you for stopping by and reading my Discovered Diamond, story.

You can find out all about Doreen and her daughter, and if her lottery ticket really did have lucky numbers, in the full story of Sometimes It Happens….  Click Here 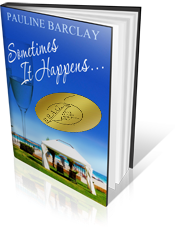 You can find out more about Pauline and her books at… 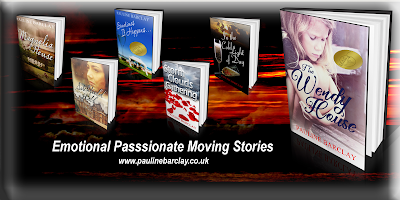 Pauline is also the founder of Chill with a Book Awards

* Did you notice the asterisk at the top? I thought readers might like to know that it is possible to achieve your dream because of a lottery win - I did! My husband's winning lottery raffle ticket number came up on the opening night of the Olympics in London. As a consequence we escaped London and now live in an eighteenth century farmhouse, surrounded by thirteen acres of the North Devon countryside! So yes, Sometimes it does happen!
Helen.