Reader's Voice Where have all the women gone? A look at female literary statues - or rather, a lack of them!

3% of non-royal statues in the UK are of women.
How many of that 3% are literary figures? Half? A quarter? Ten? Eight? Four?
I only found Virginia Wolfe.... but it is only a bust and not exactly inspiring: 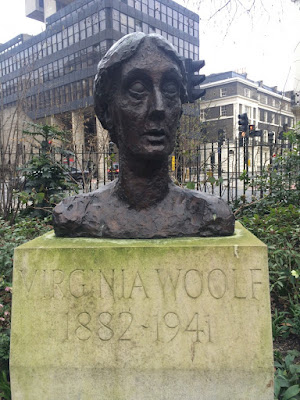 Apparently there are 925 statues listed in the Public Monuments and Sculpture Association (PMSA) database but only 158 of these are of a woman.

There are numerous statues of Queen Victoria – but what about our wonderful literary figures of the past? Those women who wrote the books that we now treasure – and have inspired many of us to write?

Believe it or not there are about as many animal statues as there are female statues.

Have we got even one of the Bronte sisters? Mary Shelley? Jane Austen? Agatha Christie? Harriet Beecher Stowe? Louisa May Alcott? George Elliott? Georgette Heyer….

There are various campaigns to petition various mayors and M.Ps here in the UK to honour our literary women (I assume the same in the US?) but how about a few suggestions for statues of women writers?

Add YOUR suggestion below – writers of the past or present!