A Thank You to HARRIET DOERR 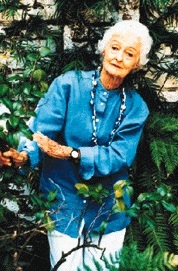 We all have those special books we hold onto no matter how often we have read them, or move. My favorites by American writers are mostly multi-layered sagas and some non-fiction: Michener, Clavell, Clancy, Rand, Manchester, and Winchester. To some extent, my own writing style has somehow evolved into expansive and detailed works (to some vexation of modern speed-readers).

However, while living in California, I discovered Harriet Doerr, an American author born in 1910, whose debut novel was published at the age of 74 (now, there is some hope for us “sprightly seniors”).

Born Harriet Green Huntington, she was a granddaughter of the California railroad magnate and collector of art and rare books, Henry Edwards Huntington of Pasadena, California. (Check out the Huntington estate with its vast botanical gardens and estate housing a huge library and art collection; they are fabulous and open to the public Huntington_Library) and, yes, I’ve been there craning my neck in wonder and  smelling the roses.)

In 1930, Harriet married Albert Doerr, Jr, and the young couple settled in Pasadena to stay there for the next twenty-five years raising their two children. Things changed in the late 1950s. Albert Doerr’s family owned a copper mine in Mexico, and the Doerrs moved there to restore the mine. They remained there until 1972, when Albert died and she returned to California.

This is a quote attributed to Harriet and her writing:

“I found I'm quite happy working on a sentence for an hour or more, searching for the right phrase, the right word. I compare it to the work of a stone cutter - chipping away at the raw material until it's just right, or as right as you can get it.”

Obviously, her sojourn in Mexico provided much of the basis for her novels.

In the last decade of her life, Harriet Doerr was legally blind from glaucoma. She died in Pasadena in 2002.

Harriet Doerr’s writing touches me. On the one hand, it is as sparse as the dusty arroyos of the high Mexican plains; on the other, it is suggestive enough for the reader intuitively to glean what is happening.

For instance, in Consider This, Señora, an old woman, Goya, roams the countryside with a billy-goat tied to her middle. 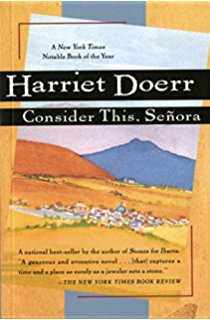 The goat stood too, alert, his front feet on top of the stone wall. At this moment a female of the species, udder swinging, trotted by on the steep track below... Goya’s animal, slit-eyed and obsessed, went over the parapet, with the old woman behind him...

What happens to Goya and her goat, we are not told – except in this one brief question asked by one of the protagonists, the widow Bowles: “Did the goat die also?”

“Also” is the one word for us to realize what happened. Sadness took my breath away; poor old Goya.

Stones for Ibarra (which, incidentally was turned into a (IMHO) mediocre movie with the talented Glenn Close) seems to have sprung from a lot of Doerr’s own experiences. 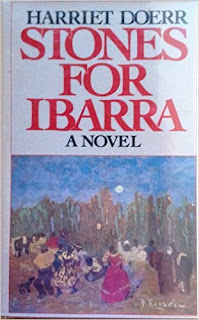 Imagine, a well-off sophisticated couple - Richard and Sara Everton - moving from San Francisco to an old adobe house in a poor rural Mexican hamlet around 1960.  They believe they can re-open a copper mine abandoned by Richard's grandfather. Already in the beginning of the book, we're told Richard will die as Sara, to the very end, will deny all their problems.

Now, in the uncompromising light of a new day, the Evertons, avoiding a column of red ants, stand on the cracked tile of their doorstep and stare across the expanse of naked earth that extends before them...

“I wonder,” says Sara, completing her unstated thought of last evening, “if we have gone out of our minds.”

You can taste the wind-driven grit between your teeth, feel their secret doubts about this rather harebrained venture, and experience the appalling poverty of the people; with some residents wily and cunning enough to become quite unnerving to the bewildered couple.


Harriet Doerr’s books are available on Amazon in paperback only with some well-priced used editions. Give them a try; you won’t be disappointed. 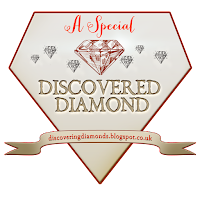