A Thank You to Dorothy Dunnet


There are two sets of Dorothy Dunnett historical novel series on my bookshelves, plus two copies of King Hereafter: a few are hardbacks the rest are now dry, cracked-spine paperbacks, whose pages are so yellow and print so small that I struggle to read them – but I still do. I’ve bought a few replacements over the past forty years, but somehow can’t bring myself to throw or even give away the originals. The other curious thing about these old books is something very modern. Without strapping any box to my head or standing in any man-made cubicle they produce a form of virtual reality. Just by looking at a title I can see scenes. Stills and moving images hang in the air: a joyous youth riding an ostrich, the same man now older rides a silken-hide camel; a little boy with sturdy legs runs through apricots drying on a rooftop; a vast eagle swoops across a snowy waste onto an arm; a mad, brave youth runs across moving oars and marries a woman with ‘spawn-like’ eyes . . . 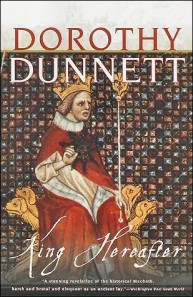 If you recognise any of these scenes you probably qualify as a Dorothy Dunnett fan, and are very likely a ‘historical fiction junkie’. That’s what I was told Dunnett fans were a few years ago. There are currently three Facebook groups for Dunnett fans that I know of. I dip in now and again and am always rewarded by some insight into a bit of history or details on one of the many locations. The news on one, as I write this, is from a student in Australia who is writing her MA dissertation on Dunnett.

Dame Hilary Mantel’s Reith Lectures on creating fiction out of past events makes this tribute particularly timely for Dunnett did not have access to the Internet to check details as we do. She conjured the past from hours of very serious reading then wove fact through her fiction, writing long into the night. By her own admission her investigations were time consuming. Speaking with Isolde Martyn in March 2000, Dunnett said, ‘My notes for my early novels are in ledgers. My studio is lined with bookcases. I buy a huge number of reference books and I subscribe to about twenty periodicals so I can keep myself informed about what is available.’ 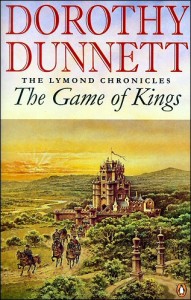 If Dunnett’s background reading into real events, people and facts was rigorous, her readers are also expected to keep up. Writing in the New York Times in December, 2000, Anne Malcolm said:
(Her) novels are unusual in their erudition; Dunnett's characters are apt to address one another in quotations from Renaissance verse (in several languages, generally untranslated), and the ground is thick with classical allusions. Using a vocabulary that sometimes outstrips the resources of the Shorter Oxford English Dictionary, the books lavishly evoke the intellectual furnishings of the 16th century.

In this regard Dunnett ignored the rules would-be authors are advised to follow – nowadays at least – because they also have hundreds of characters. They are difficult. Readers have to think. We witness what Lymond, Thorfinn and Niccolò are up to from multiple and often conflicting viewpoints. There are no revealing internal monologues from these flawed heroes to help predict what is to come or confirm what has just happened. Plots are intricate, onion-skinned intrigues – one layer reveals another then another then another. As Alaya Johnson said in 2014, ‘If a writer wants to depict political intrigue and misdirection, Lymond is the template of hidden agendas and the benchmark of single-minded ruthlessness’. 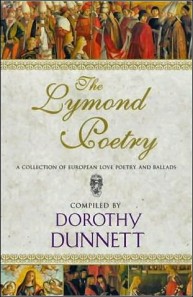 There are a few so-called rules for modern writing Dunnett does observe, however: the opening ‘hook’; the flawed hero, and ‘show, don’t tell’. The Ringed Castle opens with: ‘Not to every young girl is it given to enter the harem of the Sultan of Turkey and return to her homeland a virgin.’ Try putting that one back on the library shelf! Regarding her charismatic, flawed hero Lymond,

Dunnett is quoted as saying: 'Ian Fleming was a friend of ours and he told me he was going to write a novel about 'a spy to end all spies' and he went ahead and created James Bond, and I decided, 'Right, then, if he can do it, so can I! I am going to create the hero to end all heroes'.

Before becoming an author, Dunnett was a successful portrait artist which may explain how and why she shows us personalities through significant details or scenes.

Take this as an example:
''Each in its nest of gauze and gilt thread, of tissue and taffeta, swathed in silver and satin, in velvet and white fur sugared with diamonds, each face painted, each brow plucked, hair hidden by sparkling hair of raw silk, the well-born of France sat in waxlight and flowers like half a hundred candied sweets in a basket. Last at the last table, soggy gristle next the sugar plums, sat Thady Boy Ballagh.''

‘Soggy gristle’ Thady Boy Ballagh is Lymond in disguise, but we also see aspects of minor and secondary characters’ personalities and private histories via significant scenes. In the first novel in the Niccolò stories, Katalina van Borselen, a key figure in Niccolò’s life, is shown to be afraid of night-flying insects. In the third story Race of Scorpions set on Cyprus, her cold demeanour is completely undermined when dusk falls and moths gather around a lantern. We are reminded of what happened in Bruges in Book One and what has happened to her since with a few artful brush strokes. In the same story we learn of the wantonly cruel nature of a Mameluke commander not through his violence towards other men but from what happens to a hundred innocent, many-hued monastery cats.

I’m not a cat person but the image of those cats when they are first presented in their warm and subtle, multi-coloured hues stayed with me for years, so much so that when I was in an Italian mountain-top village a long time later and they re-appeared weaving patterns around me I had to go home and write about them.

As a reader I continue to be enthralled by these stories, but as an author I am permanently in awe. Dorothy Dunnett set the bar very high.