A Thank You to Barbara Erskine


If you know and love historical fiction, you will know the name of Barbara Erskine. I came across her at school where the same dog-eared copy of Lady of Hay was passed around the classroom with all the reverence of a copy of the Bible. 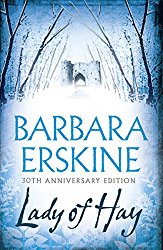 I personally was hooked. This version of history was fun! It combined real fact with the possibility that these charismatic, larger than life characters who made up those heady days of Angevin rule were actually in reach of us 800 years later. If only…

I went on to buy everything I could lay my hands on. I loaned Kingdomof Shadows to my best friend and vowed never again to lend anyone one of my books when it came back as battered as that copy of Lady of Hay. I am a pristine reader – my books can be read three or four times and still look like they have never been opened, so the distress caused by the damage to my lovely copy of Kingdom was great indeed.

Child of the Phoenix dovetailed nicely with my favourite novel on Wales, Here be Dragons by Sharon Penman. Having to suffer the death of Llywelyn again wasn’t such fun, but to see how the histories of Wales and Scotland intertwined was fascinating, and seeing these people as living and breathing did help my studies at Aberystwyth, even if Prof. J. Beverley Smith was less than impressed with my research methods. 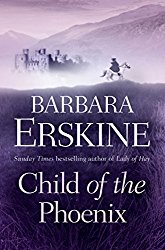 I went on to buy every novel she produced, and the two earlier collections of short stories. Encounters was never far from my side and Distant Voices joined it. I could dip in an out and marvel again at the cleverness of the plot twists. I still recall so many of them – murder by icicle and a ghost who vets potential boyfriends being favourites from these volumes. 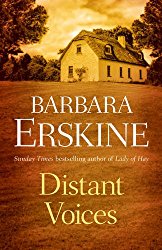 It is that skill and imagination that draws me to Ms Erskine, the confidence to explore the supernatural and accept that more than we comprehend exists? I’ve always been interested in ghosts, probably encourage by my mother, and Erskine gives you that in spades.

What also draws me to her is the passion for history that bursts from every page. She added to my patchwork knowledge of history before A-Level History and going to uni, and between her and Penman, well, uni to an extent just filled in the gaps. She feels history, lives with it, sees it as something alive and not a collection of pieces on a chessboard being moved around to suit the latest hypothesis of the acknowledged historians. The people in her novels are as real in 1204 as they are in 2014, and that is a joy to read.

But she is a great mystery writer as well, and that is never really praised enough. Yes, we all know she writes good, accurate history, but her murder mystery talents are there as well. My favourite novel is Midnight is aLonely Place, a title that hardly skips off the tongue, but the content is stunning. You have never felt cold until you have read this book, never felt such shivers go up your spine, and in no other historic novel have I feared for the characters as one does in a George R. R. Martin saga. 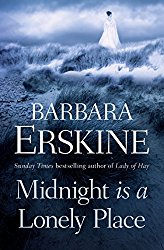 I recently discovered that Ms Erskine’s background and mine do touch and it would be marvellous to think our respective ancestors knew each other. It is possible. Her family went to India with the East India Company and served in the Indian army. Mine went with the East India Company with the English army and they appear to have been there at the same time. Her family remained, my returned two generations later, having toured northern India and Pakistan. It is possible that they knew each other, knew of each other, glimpsed each across a parade ground. Maybe I should ask her…

A note of caution in reading Ms Erskine is that I did find that the story of each book seemed to follow the same theme with the same collection of characters, almost even the same number of main characters and the same kind of supporting cast. The names changed but what they did and said and felt remained the same. I wonder if the publisher dictated the story rather more than Ms Erskine? I know that can happen when there is a contract in place. 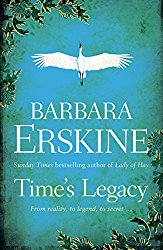 And yet I still read her. In among the ‘haven’t I read this before?’ doubts are moments of pure genius and beauty that capture you and remain with you. Time’s Legacy is another favourite, one that I felt suffered from déjà vu, but the character of Jesus is one of the most marvellous that I have read, up there with Cadfael in my favourite ever written characters. If Christ really was like this, then there is no wonder people followed him. Charismatic, gentle and with a wicked sense of humour, what more can you ask of a God? And the ending…  No, I won’t give that away, but it is the best ending I have read to any novel. 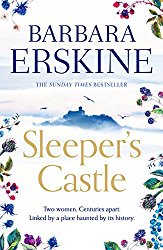 I have yet to read her new novel Sleeper’s Castle, it hasn’t been out long, but I think I will go and buy it, which is something for a reviewer who never seems to get to the bottom of her To Read list, but some authors are worth it getting behind for. Castle returns to Wales and that is too much of a pull to ignore – Erskine and Wales, what a treat.

A historian by training, Barbara Erskine is the author of many bestselling novels that demonstrate her interest in both history and the supernatural, plus three collections of short stories. Her books have appeared in at least twenty-six languages. Her first novel, Lady of Hay, has sold over two million copies worldwide. She lives with her family in an ancient manor house near Colchester and in a cottage near Hay-on-Wye.