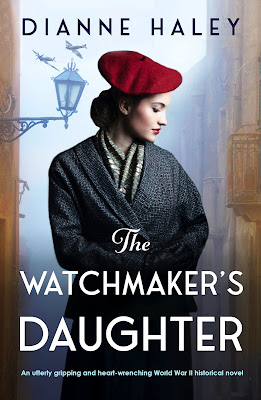 It’s November 1942 and neutral Switzerland is maintaining its precarious independence, but at a cost. The residents live on a knife-edge of suspicion, shortages of food and essential supplies, German spies and Swiss informers. Who is friend, who is foe? Life is dangerous. Frightening. Horrific.

Valérie’s boyfriend, Philippe, joins the Swiss Army. He and his colleagues are barracked in mountain caves, ready to defend their fragile borders. At any time, the Nazis could sweep through, as they have in so many other European countries. Philippe is selected to do special secret map-making work. But something is off. He’s falsely accused of espionage. Who is the spy?

Valérie, desperately missing him and wanting to contribute to the struggle, joins the local Resistance, which works closely with the French Resistance. Because she does the courier deliveries for her skilled watchmaker father, she’s able to cover her activities. At first, it’s messages she delivers, but soon she’s helping to smuggle people-- Jews escaping from Vichy France. Then--someone discovers her secret. Who is the informer? Is it one of her friends? Is it the unpleasant German, Dieter, who’s one of her father’s important clients? But how could he know?

Tension keeps ramping up. The stakes get higher. It’s an exciting read and I’m happy to recommend it. You’ll get drama, a love interest, a tight story and carefully researched historical detail.

I was unaware of how much the Nazi war machine had an impact on neutral Switzerland. However, that neutrality came at a cost. This book helps fill the gap, through the eyes of a brave young woman.

My only niggle is that at times I felt the storyline was a bit jerky. However, it didn’t detract from an exciting story.