A Discovering Diamonds Review of Men of Bone David Penny 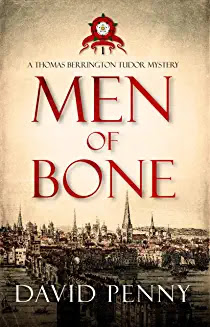 Amazon UK
Amazon US
Amazon CA
Amazon AU
Goodreads (Goodreads: a little confusing as the link goes to the correct title and description, but the book cover does not match up?)
Fictional  drama / mystery
1500s / Tudor
England

“1501: London, England. Can a man turn his back on all hope to protect those he loves?
Returning to an England now alien to him Thomas Berrington falls foul of a thieves’ guild. In his efforts to protect a stranger he becomes their target. When the bonemen come to inflict punishment he has no choice but to kill one of their order. Fleeing London in the company of Arthur, Prince of Wales, heir to the English throne, Thomas believes he has escaped retribution for his actions. But it is a mistake that may get him and his companions killed. Sent to England by the Spanish Queen to watch over Catherine of Aragon on her marriage to Arthur, Thomas intends the duty to be short-lived. But he hasn’t reckoned on the bonemen, who are spreading their influence ever wider. As danger mounts, Thomas is no longer sure he is the man for the task but has no option but to fight, as he always has. For the innocent, for justice, and for his life. Politics and crime collide in Tudor England in a new series of adventures for Thomas Berrington. Join him on his latest journey in Men of Bone now.”

This is the first I have read of author David Penny, and apparently Men Of Bone is the first in a new series which continues on from a previous adventure/mystery series about the same characters, and in particular the protagonist, sixty-year-old Thomas Berrington.

The book is set at the time of Catherine of Aragon’s betrothal and marriage to Henry VII’s eldest son, Arthur – I enjoyed his inclusion – and it was a nice change to have a Tudor story that was not Henry VIII or Anne Boleyn!

It was obvious from the first chapter that this was a continuation of a previous series, as the narrative throughout included quite a few references to Berrington’s backstory of his early life in England, and his subsequent adventures in Spain serving Queen Isabella. On the whole this backstory element did not hinder this present story: there were enough facts to understand Berrington’s past and therefore his present involvement with both the Tudor and Spanish courts, but some of the references were a little tedious as they were often repeated but not fully explained. No spoilers, but his relationship with the Spanish Queen and the princess Catherine, for instance. Would someone like Berrington really be so close to both of them? But then, as I have not read the previous books, I cannot say – although I did feel this was, maybe, a little far-fetched. As also was Berrington’s fighting ability. For a sixty-year-old man he was remarkably fit and agile, even after a severe beating by his enemies, but then, this is fiction.

I’m not sure that this qualifies as a mystery as such – I realised at least one ‘baddie’ right from the start (maybe the red-herrings were not well enough hidden?) – but the plot was interesting and the characters were intriguing. The detail and description of Tudor England was well researched and written. There was some violence and a rape – an area where I did feel the victim's later reaction was too calm, too accepting of what had happened. (And was a rape even necessary for the plot?) Perhaps, though, her violation will be explored more in the next book?

There were a few typos in the e-book edition I read, and Aunt Joan turned into Aunt Jean then back again, plus I spotted a few continuity errors, however, none of these detracted from the story.

So, a good romp worth reading, set in a different Tudor period to the norm, with engaging characters and no need to be familiar with the original series. Readers of Berrington’s past will particularly enjoy catching up with his family and his ‘present’ adventures.