A Discovering Diamonds Review of The Scribe by Elizabeth R. Andersen The Two Daggers: 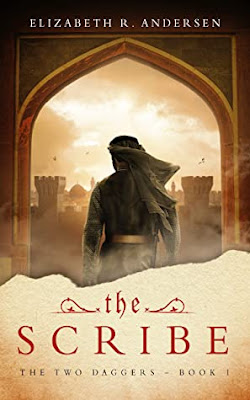 Amazon UK
Amazon US
Amazon CA
Amazon AU
Goodreads
Fictional Drama
13th Century / Crusades
Holy Land
"All Henri of Maron wanted was to stay with his family on his country estate, surrounded by lemon groves and safety. But in 13th century Palestine, when noble-born boys are raised to fight for the Holy Land, young Henri will be sent to live and train among men who hate him for what he is: a French nobleman of an Arab mother. Robbed of his humanity and steeped in cruelty, his encounters with a slave soldier, a former pickpocket, and a kindly scribe will force Henri to confront his own beliefs and behaviors. Will Henri maintain the status quo in order to fit into a society that doesn’t want him, or will fate intervene first?
The first book in The Two Daggers series, The Scribe takes readers on a sweeping adventure through the years and months that lead up to the infamous Siege of Acre in 1291 CE and delves into the psyches of three young people caught up in the wave of history."

Acre, one of the oldest continually-inhabited settlements on earth, has had a long and sometimes violent history. From about the middle of the 7th century CE, it was an Islamic city, until it fell to Baldwin of Jerusalem in the First Crusade in 1104. In 1187 the Ayyudib sultan Salah al-Din reclaimed Acre as a Muslim city, but lost it again to a combined European Christian force in 1191. Both militarily and economically important due to its strategic position and its access to the Asian trade, Acre would be fought over even by those who were meant to represent the same interests.

Elizabeth Andersen’s debut novel, The Scribe, is set in the years leading up to the siege of Acre in 1291 by Al-Ashraf Khalil, the eighth Mamluk sultan. Rumours of invasion are building, but harrying by the Mongolian Golden Horde is dividing Mamluk attention. But while this may concern the military and religious leaders of Acre, more immediate concerns occupy the three young people whose lives the novel follows.

Two are brother and sister, Emra and Ela, later known as Zahed and Sidika. Their village destroyed and their parents killed by Mamluk forces, both will become enslaved in different ways. The third is a noble child, Henri de Maron: European nobility, but also an outsider; his mother is ‘Saracen’, Arab. As the years progress and war looms, the lives of these three become, through a series of plausible coincidences, intertwined.

Henri is the central character, a bitter young man who must, on the sudden death of his father, take control of his family’s fortunes. Threatened not only by the political situation, but by an enemy, Philip, who wants Henri’s lands for his own, Henri must grow up – a lot. He has both his mother and his sisters to protect, and his duties as the lord of his manor. But Henri is neither old enough nor wise enough to make the correct choices very often.

The Scribe is well-researched, and of particular interest to me was the inclusion of the Mongolian incursions into the area, something rarely mentioned in the history of the wars for control of Acre, Jerusalem, and the middle East. The Scribe is not a story that glorifies the Crusades, but acknowledges the cultural and scientific knowledge of both Jews and Muslims, as well as the cruelty and violence imposed on them by Christian crusaders.

The device of the intertwined lives of the three young people, each of a different religion, works well for the most part, and the intrusion of the antagonist Philip adds to the sense of danger and intrigue. Description is effective, and the pacing kept my interest.

There are a few proof-reading errors, and a warning: there is a cliff-hanger ending. (The book is subtitled The Two Daggers: Part 1, and it is an incomplete story.)  But a solid debut, and a more comprehensive look at the historical background surrounding the struggles for control of the Middle East in medieval times than I usually see. The Scribe should interest readers who like personal stories set against the turmoil of historical events.