A Discovering Diamonds review of Lies that Blind: A Novel of Late 18th Century Penang by E.S. Alexander 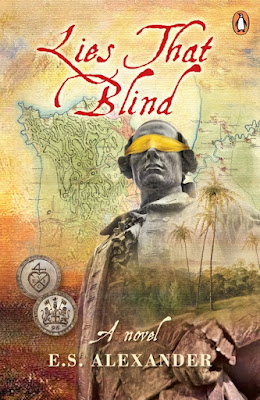 "1788, Penang, Malaya: A young man desperate to prove himself becomes enmeshed in the web of deceit woven by an ambitious adventurer whose double-dealing imperils the island's inhabitants.
Malaya, 1788: Aspiring journalist Jim Lloyd jeopardises his future in ways he never could have imagined. He risks his wealthy father's wrath to ride the coat-tails of Captain Francis Light, an adventurer governing the East India Company's new trading settlement on Penang. Once arrived on the island, Jim - as Light's assistant-hopes that chronicling his employer's achievements will propel them both to enduring fame. But the naïve young man soon discovers that years of deception and double-dealing have strained relations between Light and Penang's legal owner, Sultan Abdullah of Queda, almost to the point of war. Tensions mount: Pirate activity escalates, traders complain about Light's monopolies, and inhabitants threaten to flee, fearing a battle the fledgling settlement cannot hope to win against the Malays. Jim realises that a shared obsession with renown has brought him and Light perilously close to infamy: a fate the younger man, at least, fears more than death. Yet Jim will not leave Penang because of his dedication to Light's young son, William, and his perplexing attraction to a mercurial Dutchman. He must stay and confront his own misguided ambitions as well as help save the legacy of a man he has come to despise.
Inspired by true events, Lies That Blind is a story featuring historical character Francis Light (1740-1794) who, in an effort to defy his mortality, was seemingly willing to put the lives and livelihoods of a thousand souls on Penang at risk."
Penang seems to be quite popular these last few months for works of historical fiction, which is one of the good things about this genre, for we get to read different history about different people and places – a refreshing change from genteel English Georgian Romance, the Tudors or WWII!
The research in this novel seems meticulous, using the actual letters that Captain Francis Light wrote. The detail of the culture, the era, the location are utterly absorbing; it is very clear that Ms Alexander has great feeling and intricate insight for Penang.
Readers might find the opening narrative more reflective of a non-fiction history book rather than a novel, but keep with it for once we get into the fictional world things really takes off with a character-driven story that incorporates drama, intrigue, suspicions – in short all the stuff of a well-written thoroughly engrossing mystery thriller.
My only niggle is, as with all mainstream novels, (Lies That Blind is published by Penguin) and something we often mention here on Discovering Diamonds, is that the price of the e-version is very high (£11.99at the time of writing this). But prices are set by the big publishers, so this is not within the author’s control. Fingers crossed for some special offers – in which case grab a copy quick!
© Anne Holt
paperback  reviewed