A Discovering Diamonds Review of The Falcon's Flight: A novel of Anne Boleyn by Natalia Richards 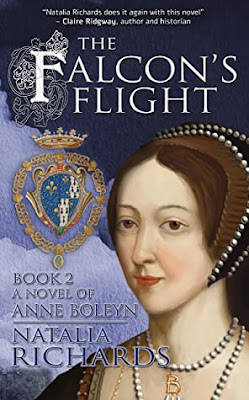 "Anne Boleyn's life is threatened, intrigue, gossip and treachery abound, and her destiny is finally revealed. A young Anne Boleyn and her sister are sent to Paris to attend Mary Tudor, the new Queen of France. Unclear where her loyalties should lie, Anne soon makes an enemy of the queen. When the widowed Mary returns to England, Anne stays on in France to serve the new queen, Claude, but Anne's sister's actions put the girls' new court career at risk. A dangerous love affair follows and Anne finds an unlikely ally in the French king's mistress. But nothing ever goes to plan...The Falcon’s Flight is the second part of Natalia Richard’s vivid retelling of Anne Boleyn’s early life. Book one, The Falcon’s Rise, vividly portrayed Anne’s early life in England. The Falcon’s Flight takes us on to Anne’s ever eventful life on the continent."
This is a novel of the early life of Anne Boleyn, particularly interesting as we know so much about her later years, but not so much about her pre-English-queenship period. The novel delved into the day-by-day routines and rituals of Anne's days as maidservant to the queens of France, the courtly intrigues, scandals, jealousies, loves and relationships, which any devotee of the Tudor period will find fascinating.
The research appears impeccable, although I do wonder if perhaps there was a little too much information given at the expense of the narrative. There was quite a bit of dialogue in places giving a 'tell' not 'show' impression, which in my opinion slowed the story down in places. There was a lot of traveling from one place to another - maybe a little tedious for the reader? And a host of characters, some of whom were difficult to remember, especially as many had the same or similar names - although that is not the author's fault!
A good read; will be of particular enjoyment for Tudor fans.
Reviewed for Discovering Diamonds