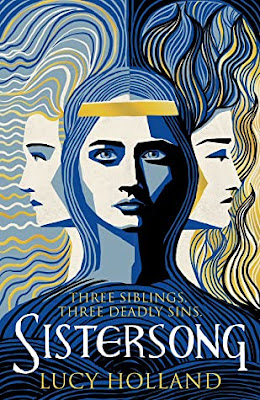 Amazon UK
Amazon US
Amazon CA
Amazon AU
Goodreads
fantasy
6th century
Post-Roman Dumnonia (modern Devon)
In post-Roman Britain, shifting politics and religions created tensions between the people and rulers. Some remained true to the older pagan religion while others converted to the new religion of Christianity. Some rulers adopted Roman practices in many facets of their life and others held to the traditional British ways. Sistersong centers around three sisters, children of King Cador of Dumnonia (modern Devon), whom Holland interprets as the sisters from the traditional ballad “The Twa Sisters.” Riva is the eldest of the three, scarred for life by a fire; Keyne, the middle child, battles with her family to be accepted for who she truly is; and Sinne, the youngest, is spoiled and thoughtless in her pursuit of romance. When a mysterious warrior, Tristan, arrives at their father’s stronghold with urgent news about an imminent invasion by a dangerous Saxon king, a chain of events is set off that will affect the sisters in unimaginable ways. Aided and mentored by the fictional Myrdhin, stymied by the historical Gildas, the royal sisters embark on their own journeys to become the people they were meant to be.
This gorgeous novel focuses on the shifts between the dominant groups of the time - pagans and Christians, Britons and Saxons - and the ways in which the intersection between groups can create conflict. Readers see these intersections and tensions most strongly played out in the narrative of Keyne and the expected role of women in their society; and between the fictional Myrdhin, a variant of the Arthurian wizard Merlin, and Gildas, a historical monk who lived in the 6th century.
I loved, too, the theme of consent that recurred throughout the novel. Riva, Keyne, and Sinne are expected to marry men their father selects for them, based on political need. Theirs was the duty of most noble and royal women for most of recorded history. Forcing women into limited roles is reflected in many works of literature, including “The Twa Sisters” ballad. It is a very patriarchal ballad and demonstrates women’s lack of agency in general. The desires and thoughts - indeed, even the basic input - of the women are disregarded. This holds true for Keyne in particular, who identifies as male (and yes, there are many examples of nonbinary or transgendered people throughout history; it is not an issue confined to our modern society). Despite Keyne’s identity as a man, the majority of people around him refuse to address him as such, including his family. The erasure of women in general, and of people who do not fit into the patriarchal narrative of a society, is a clever way in which Holland answered the question of why there were three sisters referenced at the beginning of the ballad, but only two by the end.
There are so many delightful points about Sistersong that, were I to address even the top few on my list, this review would be near the length of the actual novel. Suffice to say, Sistersong is one of the best retellings or Arthurian legend I have read in years, and it definitely is on my personal list of the best books of 2021.
Reviewed for Discovering Diamonds