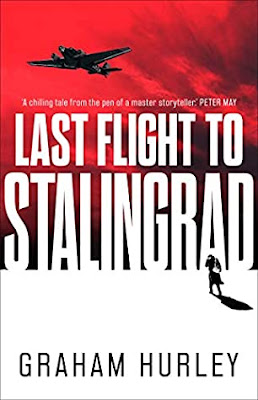 Amazon UK
Amazon US
Amazon CA
Amazon AU
Goodreads
fictional drama
WWII 1940s
Germany / Russia
Werner Nehmann is a man in a difficult situation. He’s a man who’s reinvented himself more than once: born in Georgia, apprenticed to the blood and brutality of butchery, he fled the limitations of his village to take a German name and become a journalist. Time in Paris has further removed him from his origins, but now he writes for Goebbels, propaganda for the Third Reich. Blood and brutality are inescapable, but somehow he must find a way to make it sound acceptable.
The book opens with Nehmann remembering a circus act he saw as a child: the illusion of levitation, and his belief that what he saw was real. In a way, Nehmann has lived his life believing in levitation: the detachment of journalism allows him to rise above the truths of war and genocide. But the German Sixth Army is attacking Stalingrad; winter approaches, and Nehmann – through an uncompleted personal errand for Goebbels - will be forced to confront realities on the ground.
Hurley is a master of evoking setting and mood with few words, and running through Last Flight to Stalingrad is a sense of emptiness: the bleakness of the steppe and the space of the sky reflecting a theme of hunger. Not just the physical hunger that awaits, and comes for, both the Sixth Army and the Russians under siege, but the hunger for human connection, for friendship, for love, that is felt by almost all the characters, whether Goebbels, or the damaged, determined pilot Messner, or Nehmann himself.
This is the second World War from the intimate viewpoint of Germans, both historical and fictional, humanizing individuals who are often seen as one-dimensionally evil. Hurley makes no value judgments, with the exception of Hitler, who, through the eyes of the other characters, is seen as fanatical and unstable. Last Flight to Stalingrad concerns itself with the universal truths of war, much as All Quiet on the Western Front does.
Highly recommended.
Reviewed for Discovering Diamonds
© Marian L Thorpe
e-version reviewed