A Discovering Diamonds Review of A Betrayal of Heroes: A Novel of World War II by David Ebsworth 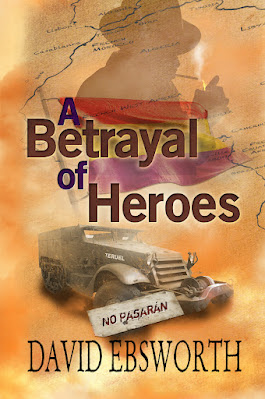 Historical Drama / adventure
Spanish Civil War  /WWII
Spain / North Africa / Europe
(Jack Telford Mystery #3)
"Headstrong newspaperman Jack Telford’s weapon is his pen, but the oath he’s taken at Kufra will still bind his fate to the passions and perils of the men and women who shape his life – his personal heroes, like the exiled Spanish Republicans now fighting for Free France. But from Oran and Casablanca to the heart of Africa, then into the cauldron of Normandy and the Liberation of Paris, Jack’s fate is also bound to those who will betray them, and to the enemies who want Telford dead."
At over 770 pages this is a big book. The aftermath of the Spanish Civil War left many Spaniards displaced, either as POWs in concentration camps, but there were also many who fought as French allies throughout WWII, fighting against fascism.
Jack Telford is a journalist. His weapon is the written word. Throughout the Spanish Civil War he reported events, but with Franco winning, had to flee in order to remain alive. This is the first time I met Telford, I liked him as a character, and I particularly enjoyed meeting the actor Leslie Howard, (Ashley in Gone With The Wind) and the mystery that clings to his death. (Was he a spy, involved in the resistance, deliberately killed?) Several other famous names come and go as Telford continues on through the War. These characters were very cleverly, and believably brought into the story.
Ebsworth takes real events, real people and real places and weaves them into a story about World War Two from a different, Spanish, perspective. But therein lies the slight snag. The author has included the entirety of the War, hence such a huge book. The detail could easily have filled two or even three volumes instead of the one enormous tome. Add to that, I think the impeccable detail - with the amazingly good research - somewhat overshadows the action and the characters themselves. There isn't a lot of action, and there are far too many characters. I found it hard to keep track of them all, reading on a Kindle. The result is an interesting, very well written account, but readers who want action and in-depth characterisation will not find those ingredients here.
Readers who thrive on WWII stories, who go for the in-depth detail of intrigue, battles and campaigns, however, will love this book, I can't fault it for those elements.
Reviewed for Discovering Diamonds