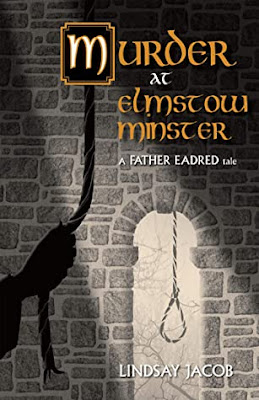 Murder mystery
Anglo-Saxon
England
I liked the premise of this novel very much. Murder mysteries seem to be enjoying an upsurge in popularity at the moment, as do the so-called Dark Ages. So to marry the two together is a brilliant idea. The novel has a very strong opening. The two bodies mentioned in the blurb are indeed discovered, hanging together. What's not revealed is that there is something unusual about them, and this made me think of the symbolism of the murders in Umberto Eco's The Name of the Rose.
After this dramatic opening scene, we then have chapters told from different characters' points of view, which sets up the mystery nicely. As with all good murder mysteries, and in the style of Midsomer Murders (a British TV Series) a lot of the suspects are involved in the incident but aren't actually the murderer, so there are lots of false/cold leads, and red herrings, and what ifs - are those who confess to a little bit of wrongdoing definitely innocent of the rest? In terms of the genre, this fits the bill. The plot has been cleverly worked out, the pacing of the reveal is good, and all the clues are there for those who can spot them.
There were a few things which didn't chime quite so resoundingly for me. At times it was difficult to work out who was talking during the dialogue, and perhaps characterisation has been sacrificed a wee bit in the telling of a complicated story. In fact I'd say that in general there is rather too much dialogue, and the book would have benefited from some judicious editing in this regard - one woman on the point of death, and having fallen to the floor in agony, then continues to speak for too long a time, where even a few gasped words would have been difficult for her to manage.
Most of the book is told from the point of view of Eadred, the central character, but at times we were lifted out of this when Eadred tells us things about his own expression, how he appeared, etc. Again, some editing to tighten this up would help, as would checking the passages where past tense slips into present for a few paragraphs. There was an odd choice of word at times and some clunky turns of phrase. Again, some tightening and trimming would make the prose stronger.
There were some historical details that I would question, though I'm not an expert on this period. I wondered, for example, about all the stone buildings, corridors etc, and given that the enemy were Christians, I found it difficult to believe that they would torture and rape nuns. In the case of those they hoped to ransom this is surely pertinent - you can't raise a ransom on 'damaged goods'.
I wasn't convinced by the denouement, where Eadred suddenly acts out of character in relation to one of the postulants and to the last murderer revealed. I felt he went completely against character and his own beliefs but to say more would be too much of a spoiler.
To sum up, maybe not strictly historically accurate in places and maybe a little too graphic in the detail of violence and sex for some readers. Three stars for the caveats, but four overall for an ambitious project tackled by a novice author and a story which was, otherwise, well executed with a good, strong plot.  It seems that this might be the beginning of a series and if so, I'm sure the author will develop with experience and guidance, gaining a distinct 'voice', but I strongly suggest a good technical editor to iron out the wrinkles.
Reviewed for Discovering Diamonds
©Lucy Townshend
e-version reviewed