The London Monster by Donna Scott

Given that Discovering Diamonds is now becoming very popular (and is establishing a favourable reputation!) our list of books to be reviewed has increased - which means we can now post a review every weekday instead of only three times a week. Thank you to all our enthusiastic supporters, readers, writers and reviewers who have made this site such a success! 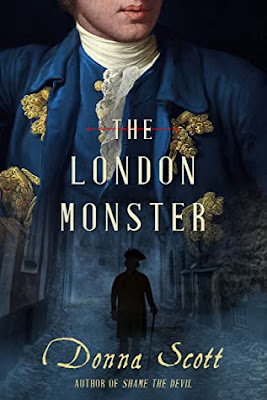 Amazon UKAmazon USAmazon CAAmazon AUGoodreads
Historical mystery
18th century/ Late Georgian period
London
(some content of a sexual nature)
In Late Georgian London, a man dubbed as “The London Monster” was attacking women, assaulting first their ears and sensibilities with terribly vulgar come-ons and, when those inevitably failed to win the lady’s affection, he stabbed at her with a dagger. Most of the women only had their dresses torn, though a few were cut on their hips and fortunately, none of them died. It is unlikely that the correct man was ever arrested, though one man did serve time in Newgate as the Monster. Author Donna Scott takes this historical figure out for a ride in her new novel, The London Monster.
Sophie Carlisle, daughter of a minor noble, wants nothing more than to become a journalist. Unfortunately, not only is that a profession forbidden to women, she is also betrothed to Cuthbert “Bertie” Needham, her childhood friend. To attempt to get her articles written and published, Sophie goes around London dressed as a boy, researching and following leads. In the course of her journalistic adventures, Sophie meets and befriends Maeve, an Irish prostitute. Tom Hayes, meanwhile, is the son of a filthy rich merchant with aspirations of a seat in the House of Commons. Tom is haunted by his mother’s murder, which he witnessed when he was ten. To atone for his past helplessness, Tom now is a pugilist and vigilante, determined to catch the Monster before he can hurt any more women. Their paths intersect in so many ways, some entirely unexpected.
I loved this book. I read it in one sitting. I found the writing to be highly descriptive and engaging, the characters complex, and tone perfectly balanced to reflect a variety of tensions. Sophie is a charming and irrepressible figure. Tom appears to be one of those mythical creatures - a man who is handsome, intelligent, and genuinely kind all rolled into one. Maeve is salty and pragmatic yet still retains a deep sense of hope despite life having taught her not to bother. Each one of these characters is flawed in some way, but it serves to highlight the strengths of their personalities rather than their weaknesses.
Speaking of weaknesses. Bertie. Bertie, Bertie, Bertie. He had great potential as a man but he’s just so gross and frankly, pathetic. I don’t think readers are supposed to like him, and certainly I did not. If he had even a little more self-awareness and consideration for others, he might have been a sympathetic character. As it was, he came off as more of a self-centered whiner who tried to make Sophie love him even while thinking about how marrying her would solve his family’s debt crisis. Not sure you can truly love a person if you want them for their money, no matter how hard he tries. And perhaps he really did love her, but it always seemed tinged with a variety of desperation.
I’m not sure if the author wrote about certain themes intentionally or if I am imposing my own interpretation upon the story. However, I picked up some strong themes of consent and safety throughout this book. There was obviously no consent at all in the Monster’s attacks on his victims; they all roundly rejected him and he forced violence upon them anyway. Maeve occupies a liminal space of consent - she is a prostitute so her consent is implied through her vocation, but she hates it and is ashamed, so her consent is grudging at best. Sophie wants to help catch the Monster in part because of a frightening experience she had at a party several years earlier when a gentleman she flirted with tried to rape her. At one point, she also tells Tom that she wants the Monster to be caught and imprisoned because she wants him and all men to know that they can’t make women feel they can’t be kind or polite without risking assault, so a modern woman’s continuing issue!
Linked, Sophie feels ashamed of the incident at the party, despite the fact that it was not her fault - again, still an issue today. I can only imagine how much worse it would have been in the 1780s. And, as explained in the Author’s Note, while there were more than fifty reported cases of women being attacked by the Monster, the true figure is unknown. Shame is carried out further in Maeve’s character. She is a prostitute and she does what she does to survive and to provide money to her young daughter, in the care of another family. But she doesn’t want to be a prostitute and, despite some very frank language about sex from her and other sex workers in the book, Maeve is deeply ashamed of what she does and dreams of a day when she might save enough money to pay off her debts to her madame and leave to do other work instead.
I also felt there was a strong theme of Otherness and acceptance of others.
Overall, I devoured this book and can’t wait to read more by Donna Scott. Highly recommended!
Reviewed for Discovering Diamonds
© Kristen McQuinn e-version reviewed