A Discovering Diamonds Review of Muskrat Ramble by Mim Eichmann 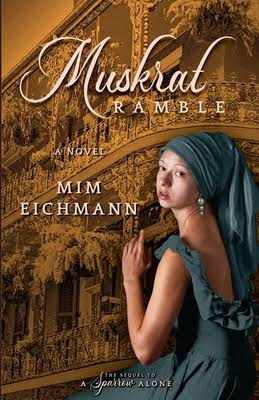 The second and final installment in Mim Eichmann's saga of before-her-time free spirit, Hannah Owens, Muskrat Ramble is a tour of (a ramble through) 20th-century America, commencing on the eve of the First World War. This meticulously researched novel takes us from New Orleans on the cusp of the Jazz Age to Prohibition-era Chicago to the Front Range of Colorado. It's a breathtaking travelogue, to be sure.

Eichmann has remarkable skill with historical setting and a musician's easy fluency with the intricacies of the early development of American jazz. It's an immersive experience for readers, surrounding us with the rich sounds and smells of New Orleans, the languid sultriness of Louisiana's sugar plantations, and the bone-chilling cold of Chicago winters. The author paints with a refined brush that renders her settings in lush and textured colors. The book is probably worth the price for the author's settings alone.

I didn't find the protagonist, Hannah, particularly likable. And I don't necessarily count this a negative. It was frankly refreshing to encounter a female protagonist in a historical novel that wasn't immediately likable. Hannah is self-indulgent, with a recurrent indifference to the effects on others of her often selfish decisions. This includes Hannah's blithely entering into a sexual relationship with Edouard "Kid" Ory, the great New Orleans jazz trombonist who Eichmann co-opts as the lover of Hannah's teenage daughter whom he subsequently impregnates. This was irresistibly tawdry and rollicking good fun. Rather than rooting for Hannah, I found myself awaiting her next train-wreck life choice, which included ending up cross-wise with Al Capone's Southside Gang. In the end, Hannah does right (no spoilers), but it's a circuitous route getting there.

The primary weakness of this book lies with the unevenness and herky-jerky pacing of the storyline. Much of this is a result of the author's impulse to show too much of her extraordinary research, forgetting that in historical novels research should, like an iceberg, remain 90% below the surface. This is most manifest in the final chapters, wherein the story moves across three decades recounting the development of jazz and the subsequent lives of the too-many musicians introduced earlier in the book, stitched together with the thinnest connections to the aging protagonist. Indeed, the book would have been improved by ending earlier. However, Ms Eichmann has the mechanics, and talent, to become a fine historical novelist, with discipline gained through experience for her future books.

Readers interested in jazz and its development will enjoy the detail in this novel.
Reviewed for Discovering Diamonds