A Discovering Diamonds Review of The Vanishing Children by Graham Brack 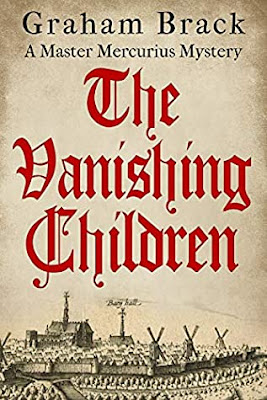 Mystery
1600s
Leiden, The Netherlands
Book 5
“The Dutch Stadhouder, William of Orange, has summoned Master Mercurius — and that is never good news. Mercurius has gained a reputation for himself with William for successfully undertaking diplomatic missions. And William is now paranoid that his own subjects — and the English exiles living in the Netherlands — are plotting against him. Mercurius is sent to gather information, but he soon finds himself caught up in another mystery. Three Jewish boys have vanished, and the local magistrates are doing nothing to investigate their disappearances. Mercurius quickly realises something sinister is going on and promises to unravel the mystery before he has to return to Leiden. Who is abducting the young children? Are more at risk? And is the Stadhouder right to fear a plot against him…?”
I enjoy a good murder mystery, and Graham Brack hits the spot by providing good entertainment in the persona of Master Mercurius – although this, the fifth in the series, is more mystery than murder. In addition to a good plot, we have humour, excellent location description (I am convinced that Mr Brack possesses a time machine), believable characters and excellent writing.
Using factual events of the late 1600s in The Netherlands and England – nearing the end of Charles II’s reign and the approaching coronation of James II and the Monmouth Rebellion - Brack has woven a mystery to be solved when three very young boys go missing from the Jewish quarter of Amsterdam. He is tasked with sorting all this out, plus there are some pompous Burghers who do not want to pay their due taxes, a suspicious Catholic priest, a rather likeable, if dutiful, cavalry officer, a servant, and a posh carriage. Add in some political machinations, which are beyond our hero’s comprehension, and you have a darn good tale.
Told first person by Master M himself, and written as if he is dictating his memoirs, the style is absorbing and frequently amusing – especially with his asides to his notes. I can guarantee a smile while reading. Our sleuth is a reluctant investigator and usually only manages to stumble on the right path by accident, while all he wants to do is pursue a quiet life at his Leiden University and be left alone to read. To his annoyance William of Orange tends to make a habit of scuppering his plans.
I have read all the books in the series, but they do not have to be read in order, although for the best enjoyment, I would suggest you start at the beginning, Death In Delft.
Reviewed for Discovering Diamonds
© Jack Holt
e-version reviewed