Abduction Of The Scots Queen by Jen Black 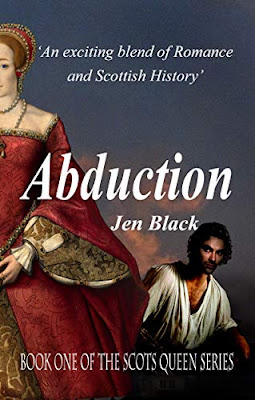 Fictional drama
1500s/Tudor
Scotland
The Scots Queen Trilogy #1
A daring attempt to abduct the infant Queen of Scots - full of adventure and intrigue
This compelling story involving the intrigues of Marie de Guise’s regency in Scotland focuses on two very different people, who for surprisingly similar reasons are willing to abduct the infant Mary Queen of Scots from her cradle in Stirling Castle.
Lady Margaret Douglas is of noble birth, the daughter of Margaret Tudor and niece of Henry VIII; Matho Spirston is a humble hired man trying to make something of his life and find enough money to wed the girl of his choice. What Matho and Meg Douglas have in common is their lack of security and their determination to improve their prospects – and the difficulties and dangers this all leads to.
Meg is beautiful, outwardly strong but inwardly insecure. Displaced as the Earl of Angus’s heir by the birth of a half-brother, Meg is in urgent need of a place at the Scottish court and/or a husband to save her from spinsterhood, which in those days meant penury despite aristocratic birth. To achieve this, she is willing to take huge risks, but her inability to foresee drastic, potentially negative consequences leads her into a life-threatening situation. Meg is a likeable, feisty anti-heroine whose personal needs take precedence no matter what.
Matho Spirston is a low-born Englishman who goes where life takes him, in this case to Stirling Castle with the son of Sir Thomas Wharton to steal the baby Queen Mary, that she may live under Henry VIII’s tutelage and marry the young Prince Edward, thus uniting the crowns of England and Scotland – and bringing peace to war-torn lands.
As the story unfolds with unpredictable diversions, author Jen Black expertly weaves in the complex court politics and clan loyalties surrounding the Dowager’s Queen’s regency. To achieve this without confusing the reader is no mean feat: Ms Black knows her epoch inside out and handles historical content with a light, deft hand, feeding essential details into dialogue and different characters’ motives. Add to this, her portrait of Meg Douglas’ attractive but entirely self-centred possible suitor, Lord Lennox, and her father, the larger than life, bombastic Earl of Angus, plus the innocent but wise servant girl Phoebe, who has stolen Matho’s heart, and you have a fascinating cast of real and fictional characters.
This first story in Jen Black’s The Scottish Queen Trilogy moves at a fast pace, each chapter bringing a surprising twist as events do not go to plan for either protagonist. The setting of Stirling Castle, high on a rock where if it is not snowing or raining the battlements are shrouded in a chill mist, is so well described I felt I was there.
Abduction is historical fiction at its best, a thumping good read involving the lives of nobles and commoners who lived long ago.
Highly recommended.
Reviewed for Discovering Diamonds
© J.G. Harlond
e-version PDF ARC reviewed