A Discovering Diamonds Review of Something in Madness by Ed Protzel 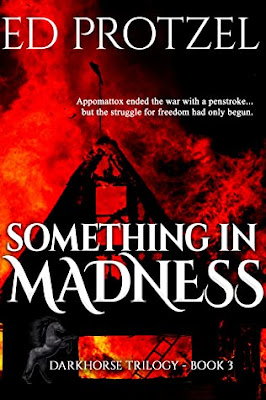 Amazon UKAmazon USAmazon CAAmazon AUGoodreads
fictional sga
19th century
USA
Book#3 Dark Horse Trilogy
"1865. After the Civil War, Durksen Hurst and three black friends return home to a devastated Mississippi, the sole survivors of a Union colored cavalry regiment. But instead of peace, they find unregenerate Confederates who reject emancipation still in charge. Undeterred, Durk opens a law practice to help disenfranchised freedmen — only to be threatened by powerful planters and nightriders. A black school is burned; a petition march to Jackson is terrorized. And when one of his friends goes missing, Durk is horrified to discover Black Codes being used to force freedmen into brutal servitude. Clever Durk schemes to liberate them but must contend with armed ruffians — and a rigged court system. Will fire and bullets prevail?"
This is the final book in the Dark Horse trilogy. I haven't read the first two but, helpfully, this one begins with a recap of what has happened in the previous two volumes so the reader is able to catch up with the story, for the most part. I say for the most part because what is not mentioned in the blurb is the other threat to Durk and his friends, the confused and confusing character of Devereau French.
Devereau's story is a huge part of the narrative and, whilst the introduction makes clear what has happened to this character up until now, I felt that in order to really understand Devereau I needed to see the character in action in the previous two volumes. Inevitably, I think, when one hasn't read the beginning of a series, some nuance and understanding of the characters is lost. It is clear from Volume Three that Durk, his partner Antoinette, and Devereau have a long and complicated history, which is neatly resolved here.
This book challenged me in many ways. It is unsparing in its depiction of the brutal treatment of technically freed slaves, and pulls no punches when showing the attitudes of those in the South who felt that the war was not over and resisted all attempts to change and improve society and the lives of the former slaves. These scenes made for compelling reading, though not necessarily comfortable reading. I applaud the author though for not shying away from such issues.
I've already mentioned Devereau, but I didn't come away from the book feeling that I'd really got to know the other main characters and, again, this might be because they've had two previous books in which to tell their story and I only met them in this, the final part of that tale. I wonder, though, if it was also because of the author's habit of presenting several points of view within the same scene? This technique is quite uncommon these days, where writers usually stay with the point of view of one character throughout an entire scene. Once I'd got used to this habitual switch from one POV to another, I had no problem with it and, in the final scenes, it was used to good effect and one POV would actually have lessened the drama. (In fact I must say that the plotting generally, and the action scenes, were clever, artful and gripping.) But I think this technique also had the effect of preventing me from really getting to know the characters and pinpointing where my sympathies should lie, especially with Devereau whose story was complicated to say the least (I can't say why because that would be a huge spoiler).
Ultimately, though, any sense of slight detachment on my part was, I think, the result of my not having read the previous two books. Whilst the author was at great pains to allow latecomers to catch up by providing a summary of what had happened before, the difficulty of not having met the characters earlier is harder to overcome. I suspect that, if I'd read all three books, I'd have been hugely satisfied with the way all the strands were pulled together and sad to say goodbye to these characters.
So a good read - but start at the beginning!
Reviewed for Discovering Diamonds
© Lucy Townshend
e-version reviewed