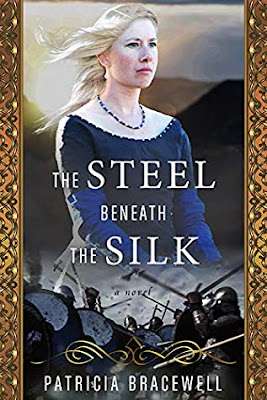 Amazon UKAmazon USAmazon CAAmazon AUGoodreads
Fictional Saga
11th Century
England
In the year 1012 England’s Norman-born Queen Emma has been ten years wed to an aging, ruthless, haunted King Æthelred. The marriage is a bitterly unhappy one, between a queen who seeks to create her own sphere of influence within the court and a suspicious king who eyes her efforts with hostility and resentment. But royal discord shifts to grudging alliance when Cnut of Denmark, with the secret collusion of his English concubine Elgiva, invades England at the head of a massive Viking army. Amid the chaos of war, Emma must outwit a fierce enemy whose goal is conquest and outmanoeuvre the cunning Elgiva, who threatens all those whom Emma loves.
I have not read the first two books in this series about Queen Emma, but this book read reasonably well as a standalone.
The story centres around Emma of Normandy who was twice queen of England, marrying first Æthlered II, or the Unraed, as he was known for his bad counsel. She later marries Cnut, the prince who becomes a king after many years of fighting the English. Throughout the book, the narrative teeters between the ‘good’ queen, Emma, and the ‘not so good’, Elgiva, Cnut’s first wife. We follow the two women’s fortunes and root mostly for Emma, because she is the likeable one and the other isn’t. At the same time, I couldn’t help but feel sorry for Elgiva.
It is always an historical fiction author’s joy to write about periods that are short of fact as the fictional 'what happened next' can be explained in so many different ways. Ms Bracewell is very good with her research and although readers may have their own interpretation of the situations that arose, there is no argument with hers, but despite writers having the freedom to fill in the gaps, it is not always easy to get it right. The plot has to make sense, the actions of the characters have to fit what we know of them historically and the story needs to be plausible. Ms Bracewell does this very well.
The prose was very good, emotive and poignant. Ms Bracewell is an excellent writer, although I did feel that some of the narrative was grim - these were grim times - but I would have appreciated a little more light to balance the shade.
This is third and last instalment of the trilogy. I do hope that Ms Bracewell will consider continuing the story of such a great woman at some time in the future.