A Discovering Diamonds Review of All Manner of Things by Wendy J. Dunn 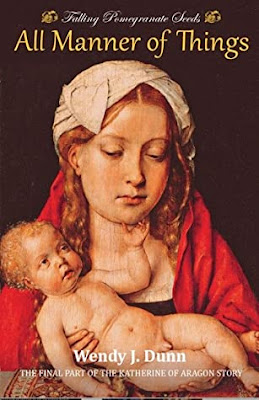 "Winter, 1539: María de Salinas is dying. Too ill to travel, she writes a letter to her daughter Katherine, the young duchess of Suffolk. A letter telling of her life: a life intertwined with her friend and cousin Catalina of Aragon, the youngest child of Isabel of Castile. It is a letter to help her daughter understand the choices she has made in her life, beginning from the time she keeps her vow to Catalina to share her life of exile in England."
Several years ago, I had the pleasure of reading Ms Dunn’s book The Light in the Labyrinth in which the sad fate of Anne Boleyn was told from the viewpoint of Anne’s niece. At the time, I was more than impressed by how Ms Dunn managed to bring new life to a story that has been told so often it runs the risk of being boring. In All Manner of Things, Ms Dunn takes us a couple of decades backwards in time, and where in her previous book it was Anne Boleyn who was the tragic protagonist, in this book it is Anne’s predecessor, Catalina of Aragon, who sits at the centre of the story.
Once again, Ms Dunn approaches an oft-told tale. Catalina (or Katherine) is one of those women who seem to have been continuously betrayed by those who should have protected her. Her father showed little concern for her fate, her father-in-law, Henry VII, treated her with anything but kindness and respect after her first husband, Arthur, died. And then came Henry VIII, this charming larger-than-life young king and carried her off to a happily ever after. Not.
Ms Dunn’s prose is beautiful and vibrant. It brings the historical setting into extraordinary life, it whispers a web round the reader that pulls them inexorably into the complexities of life in the 16th century. Sometimes, all these lovely descriptions come at the expense of pace and there are moments when the narrative slows down. Ms Dunn’s love for her period and her evident research compensates for this, as does her Catalina, initially an introverted and intelligent young girl who is thrown rather brutally into the shark-infested waters of English politics, there to swim or drown. She is fortunate in her Arthur—yet another beautiful portrayal, this time of a boy on the cusp of manhood—but life is cruel and soon enough Arthur is gone and Catalina is alone, with only her Spanish companions to offer some support.
Principal among these companions is Maria de Salinas, who indirectly is the protagonist of All Manner of Things, as it is through her eyes we see the story unfold. Maria is loyal to the bitter end and even braves the king’s wrath to comfort and succour Catalina. Ultimately, Maria can do little to save her precious princess. A woman in the 16th century had little protection against the wrath of her husband, no matter how undeserved his anger. And when Henry VIII is thwarted—like when his wife of twenty-four  years refuses to agree to a divorce so as to set him free to wed another—his rage is a nasty, twisting thing.
Ms Dunn’s Henry VIII is a man with few if any redeeming qualities. This Henry is lecherous, cruel, and so volatile his own mother fears for the kingdom should her handsome redhaired second son ever sit on the throne, expressing that Harry is too much a copy of her father, Edward IV. While every story needs an antagonist, while Henry’s behaviour towards Catalina is reprehensible, I think this rather black and white depiction of this enigmatic, self-centred king detracts from what is otherwise a multi-layered construction. A more balanced presentation of the Tudor king would have elevated All Manner of Things to an outstanding novel. As it is, Ms Dunn delivers a great and absorbing read, even for a reader such as I who generally prefers to steer well clear of the over-exploited Tudor period!
Reviewed for Discovering Diamonds