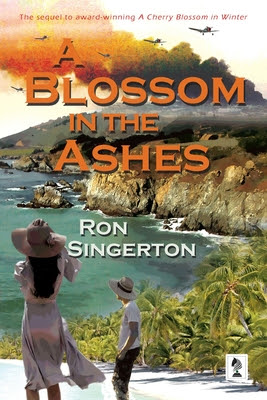 This book is a sequel to A Cherry Blossom in Winter, which I read, reviewed and enjoyed.

With a Japanese mother and Jewish/Russian father, Tadichi learns a harsh lesson in bigotry when he confesses his mixed heritage to the girl he hopes to marry and is unceremoniously dumped. Twelve years later, he is still unmarried, a fighter pilot and on Oahu where his mother lives. There he meets his brother, Koizumi, whom he hardly knows and who is also a fighter pilot in the Japanese navy. With him is the beautiful Sayuri and his mother’s old friend. But Koizumi isn’t on Oahu merely to accompany the two ladies. He has a mission which will pit him against his brother in the coming war. To complicate matters further, both men are in love with Sayuri.

The story contains some of the components of the last book – lovers of different cultures torn apart by war; battle scenes which include, in this case, Pearl Harbour from the Japanese perspective; the suffering of civilians on the fringes of war. This one has a broader sweep than the first book.

The author has cleverly set his characters in different countries to show different perspective and the impact of war on other peoples. There are the two naval pilots, Tad and Koizumi, zipping through the ether on opposite sides. Through them the author reveals his knowledge of the planes of the day and aerial combat. The air and sea battles are exciting without being overly-lengthy or too detailed. We see Sayuri alone in Tokyo when it is mercilessly bombed and when the atom bombs are dropped on unsuspecting populations just as Japan is on the point of surrender. Tad’s mother is a nurse in Hawaii. His father is in Russia when war breaks and must make his way west to Germany and the allies. His friend Jeremy, an American of Japanese descent, becomes a prisoner of war, escapes when the ship he is on is sunk, and provides some of the most edge-of-the-seat adventures in the book.

I thoroughly enjoyed this action-packed book, but I must mention one thing. The opening chapter is set twelve years before the main action and deals with Tad’s girlfriend and her parents’ horror when he tells them of his Japanese/Jewish heritage. They immediately make it clear that he is not wanted. I expected that this kind of bigotry would be explored later in the book, but it wasn’t, which left me confused about why it was included.

That apart, a book to recommend.