A Discovering Diamonds Review of The Lacquered Talisman by Laurie Dennis 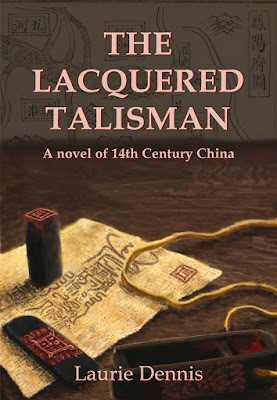 "A sweeping coming-of-age epic, The Lacquered Talisman launches the story of one of the most influential figures in Chinese history. He is the son of a beancurd seller and he will found the Ming Dynasty, which ruled China from 1368-1644. Known as "Fortune" as a boy, Zhu Yuanzhang has a large and doting family who shepherd him through hardship until drought ravages the countryside and heralds a plague. Left with nothing but a lacquered necklace from his grandfather, Chen the Diviner, Fortune is deposited in the village temple and is soon wandering the countryside as a begging monk. He encounters pockets of resistance to the ruling Mongol dynasty, studies the stars, and tangles with Taoists as he seeks to understand his destiny. Signs and dreams leave him convinced that he has a special fate. Is he to be the abbot of a monastery? A general? What matters most is that he prove himself to be a filial son."


What I particularly enjoyed about this novel was that it took me to a place I have not been, and a chance to venture into the literary world of Chinese history and culture.

This epic coming of age story is about Fortune, the founder of the Ming Dynasty, as a boy until he reached the age of twenty-three. The author writes in a literary style, and although it is fiction, it reads similar to an account told by a first-person narrator. The style is evocative of the ancient Classic style and suits this lovely novel exactly. It was easy to read but may not suit everyone.

The first part begins long before Fortune is born, exploring the tale of his family starting with his Grandfather Zhu, whose family are beancurd sellers. The tale then follows a chronological path as we see Fortune’s family’s hardship and himself ending up as a young, spot-faced, youth in a Chinese Buddhist temple. The author has cleverly taken verses from The Imperial Tomb Tablet as a framework to created this well-crafted version of the boy's early life. Perhaps the addition of a little more of Fortune's sense of being, his desires, his thoughts and feelings, would have been interesting for a reader?

One of my favourite characters was the mother, Little Chen, and Grandfather Chen who leaves the boy the talisman that is the title of this book. Little Chen suffered such hardship, having given birth to her eighth child at the age of forty and right until the end she continues to offer a stable base for the family no matter what happens along their journey to find peace and contentment.

This novel may not be everybody’s 'cup of tea' because of the style, and  it also ends abruptly, but there are two more books to follow on from this one.

The research appears to be impeccable and the author lists her sources at the end of the book.
Recommended, especially for those who enjoy Asian history.