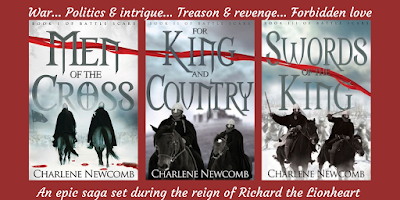 The opening of a new story? Nope. That 18 year old was me, Charlene Newcomb, aka Char. I wanted to be an astronaut, but that wasn’t in the cards. Instead, I wrote stories about galaxies far, far, away - even published a few in a Lucasfilm-licensed magazine, The Star Wars Adventure Journal. I didn’t think getting signed for a Star Wars novel was in my future, so I turned to the distant past - the 12th century - and wrote about a different kind of knight. My knights don’t have lightsabers or fly X-wing fighters. They have swords forged from iron, and ride magnificent destriers into battle. They aren’t Jedi. To quote an old pirate, “There’s no mystical energy field that controls [their] destiny.”

Let me introduce you to Sir Henry de Grey and Sir Stephan l’Aigle, knights serving King Richard the Lionheart in my Battle Scars series, and the heroes of my novels.

While the two main characters are fictional, the backdrop of the series draws on the actual history and events of Richard’s reign, from contemporary sources such as Chronicle of the Third Crusade: A translation of the itinerarium peregrinorum et gesta regis ricardi (Nicholson & Stubbs); and on England without Richard, 1189-1199 (Appleby); Richard the Lionheart (Gillingham); and numerous other works.

Men of the Cross introduces the young, inexperienced Sir Henry to the battle-hardened Sir Stephan as the men begin the incredible and long trek from England to the Holy Land (and back, 1190-1192) during the Third Crusade. This is a coming of age story for Henry, where conflict comes in the form of bloody battles and Henry’s inner turmoil, not only about war fought in God’s name, but about love.

Stephan l’Aigle becomes more than a brother-in-arms to Henry. While helping Henry come to grips with the horrors of war, Stephan falls in love with him. Get ready for angst. Henry had always expected to marry and have children. The Church has strict rules about sex outside the marriage bed. And sex with another man? Falling in love with another man? (If readers are concerned about sex scenes, no worries. There are some tender moments, and a couple of steamy ones, but nothing too graphic.)

For King and Country (Book II) takes the knights back to England. While King Richard is being held prisoner in Bavaria by the Holy Roman Emperor, his loyal knights must thwart a plan by John, the king’s brother, to seize the throne. As the plot unfolds and the knights identify friends and foes, Henry and Stephan must keep their feelings for each other hidden and have another problem: how will Henry address his father’s wishes that he settle down, marry, and turn out an heir or two?

King Richard is finally released from imprisonment after more than thirteen months, and returns triumphant to England. Swords of the King (Book III) opens two years later, and Henry and Stephan are fighting the king’s battles on the continent against France. The king’s brother John has been forgiven and accepted back into the fold, but Richard keeps a close eye on him. John is still stinging over the role Henry, Stephan, and their friends played that kept him from the throne. He is biding his time, so the knights are ever wary that John will be out of revenge. Richard keeps his brother in line for now, but what will happen if Richard dies?

Another theme that runs throughout Battle Scars is an origins story for the Robin Hood legend. Characters from the legend have significant secondary roles in all three novels, which forms a background for a standalone novel that I am currently working on. Tentatively titled Robin Hood, that story takes place 15-16 years after Swords of the King, near the end of King John’s reign. I’ll be in the UK in September visiting Newark Castle for some research!

Thank you, Helen, for inviting me to tell your readers about the Battle Scars trilogy. I hope they will connect with me! 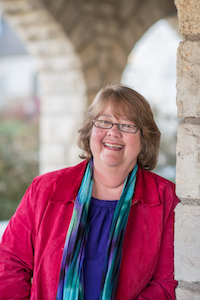 Get a free medieval short story (a prequel to Men of the Cross) when you subscribe to Char’s Newsletter:  https://charlenenewcomb.com/mailing-list/subscribe-to-my-newsletter/