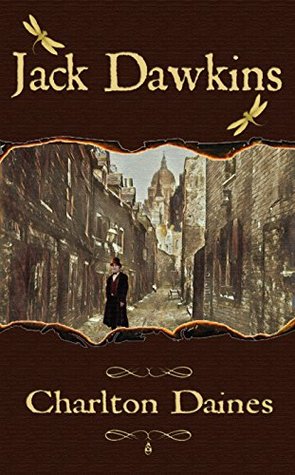 "A romp through Victorian London using some of the characters from Charles Dickens’s Oliver Twist. "

"Jack Dawkins, once known as the Artful Dodger in the streets of London, was sent to Australia on a prison ship when he was little more than a boy. Now he has returned to find that London has changed while the boy has turned into a man.
With few prospects provided by his criminal past and having developed mannerisms that allow him to move amongst a higher strata of society, Jack turns his back on the streets that would have primed him as a successor to the murderer, Bill Sykes, and quickly remodels himself as a gentleman thief.
New acquaintances and a series of chance encounters, including one with his old friend Oliver, create complications as remnants of his past come back to plague him. Jack is forced to struggle for a balance between his new life and memories that haunt him with visions of the derelict tavern where Nancy used to sing."

A romp through Victorian London using some of the characters from Charles Dickens’s Oliver Twist. The story imagines the Artful Dodger, Jack Dawkins, on his return to London after a ten-year spell in penal servitude in Australia.

Still as light-fingered as ever, he acquires a number of outfits that enable him to pass for a ‘toff’ with suitably adjusted speech and, with equal alacrity as a member of the lower classes using the London patois known as ‘the cant’. To accommodate these switches of persona, he takes lodgings in two very different parts of the town.

As an apparently well-heeled member of the establishment, he catches the eye of a wealthy young lady, while his alter ego forms a business relationship with a violent gangster. When the lady’s young brother is kidnapped, Jack sets out to rescue the child, and the story takes off.

There lies the only slight problem with the storyline: it takes too long for the action and the 'good bit' to get started. In a series of pilfering expeditions, accompanied by changes of costume, the story treads water until the child is abducted in chapter nine of nineteen. While the first chapters are interesting, I would have suggested moving the story along much quicker. During the narrative he meets up with a few of his old acquaintances, including Master Oliver Brownlow.

The language is suitably Victorian and liberally populated with many interesting words, like 'alderman' (a coin) and 'dollymop' (a doxie).

Despite the slight hiccup with getting going, this was a good read for a debut novel, certainly worthy of four stars.