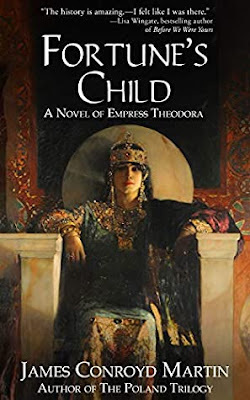 "This a very cleverly composed book ... Right from the start the reader is gripped by the style of writing."

"From a very young age, Theodora, daughter of a circus bearkeeper in Constantinople, sets her sights well above her station in life. Her exquisite beauty sets her apart on stages and in the eyes of men.
Stephen, a Syrian lad of striking good looks, is sold by his parents to a Persian wizard, who teaches him a skill in languages that will serve him well.
By the time Destiny brings them together in Antioch, Theodora has undergone heart-rending trials and a transformation, while Stephen has been sold again . . . and castrated."

A man is unexpectedly taken from the prison cell he has occupied for five years. Wondering his fate – freedom or death? – he is taken to the palace of Empress Theodora, the woman who had been his friend and confidante for many years. She was also the woman who imprisoned him.

Stephen is the man in question and the task he is given is to chronicle the life of the empress, the reason being twofold: he knows more about her than almost anyone and a rival scribe is believed to be planning a biography that will be far from complimentary to Theodora.

This a very cleverly composed book. Stephen's tough and brutal life is told at the same time as Theodora's own rather dubious past. Right from the start the reader is gripped by the style of writing; Stephen's portions are written in the present tense as he recalls and relives his life from the time his parents sold him into slavery while Theodora's story is told in true biographical style. Descriptions of Constantinople and other places in the Byzantine Empire are convincing and the secondary characters are treated well by the author.

Stephen, obviously, is fictional, but Theodora was not. Her amazing life actually happened – from 'actress' to empress – and the author's research and clear admiration for her shine through. Theodora was a strong woman who achieved even more than the heights of her youthful ambitions. Yet she never comes over as overbearing or mercenary. She tells her story to Stephen with neither embellishment nor apology.

The cover is the painting La Emperatriz Theodora by Jean-Joseph Benjamin-Constant which inspired this telling of Theodora's fascinating story.