Novel Conversations with Alison Morton and a Roma Novan!

To be a little different from the usual 'meet the author'
let's meet a character... 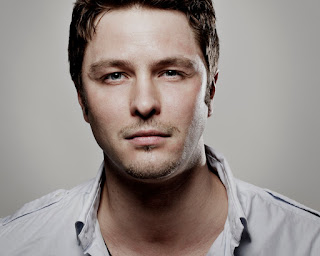 from
the Roma Nova series 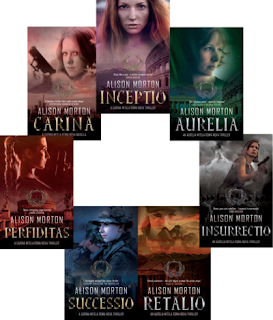 Q: Hello, I’m Helen, the host of Novel Conversations. Please do make yourself comfortable. Would you like a drink? Tea, coffee, wine – something stronger? You’ll find a box of chocolates and a bowl of fruit on the table next to you, please do help yourself. Now, I believe you’re a character in Alison Morton’s novel SUCCESSIO. Would you like to introduce yourself? Are you a lead character or a supporting role?
A: My name is Conradus Mitelus and I’m the senior legate commanding the Praetorian Guard of Roma Nova. We’re responsible for the safety of our ruler, the Imperatrix Silvia Apulia, and for Roma Nova itself. We cover security and intelligence and have an executive arm, the Praetorian Guard Special Forces, or PGSF.
*scrutinises table* I’ll have a beer, thanks. *Pops the cap with his thumb and takes a good swallow.*  Lead character? Good question. I think Carina, my wife and fellow officer, would give you an argument on that. *Sits back, relaxes and gives Helen a warm, inviting smile. Helen fans herself.*

Q: What genre is the novel and what is it about?
A: We like to cover a lot of ground, but mainly a thriller. I’m told it’s alternative history, but it feels completely real to me.
*Fixes Helen with a steady look*  Your thoughts? No? *Laughs*
Okay, here’s the briefing:

Pulled into a nightmare of blackmail, drugs and breakdown, 21st century Praetorian Carina struggles to defend her family and country against a gifted and vicious enemy who is targeting her beloved husband Conrad and his children, including Stella, the imperial heir.

Carina is an experienced military intelligence officer tasked with protecting Roma Nova – the last remnant of the Roman Empire that’s survived into the 21st century – but for once, she may not have the mental and physical strength to defeat this wrecking nemesis. But in the final agonising confrontation with her enemy, Carina has to make the hardest decision of her life…

SUCCESSIO is an adventure thriller with a difference: strong female characters and more than a dip into the Roman historical fiction world.

Q: No spoilers, but are you a ‘goodie’ or a ‘baddie’? (Or maybe you are both!)
A: An odd question.  What do any of us know how we would act in any circumstances? The author describes me as a ‘blood-and-bone Roman’. I accept that; there’s no real choice about doing the right and fair thing. I expect others to take responsibility for their actions. But sometimes, the pressure becomes unbearable and people break.

Q:  Tell me about another character in the novel – maybe your best friend, lover or partner … or maybe your arch enemy!
A: Ha! Carina, of course. She works with me in the Praetorian Guard and is one of our most successful field officers. I met her over fifteen years ago in New York when she was being hunted by a government enforcer. Her mother was Roma Novan from one of the most prominent Roma Novan families. She’s a bloody attractive woman, but I didn’t realise how much I loved her until I nearly lost her. She exasperates me when she goes off-piste – she doesn’t know what an operational rule book is – but Mars, she’s impressive. And she’s saved me more than once, in every way you can imagine.

Q: Roma Nova is ruled by a woman empress – the imperatrix – and women head the families and many institutions. Doesn’t it feel odd to be a man in that society?
A: *Laughs* Not at all! More seriously, the balance works well, especially if you compare it to the backward situation in most Western countries. It’s based on history, practicality and logic...

Q: Is this the only novel you have appeared in, or are there others in a series?
A: In the first trilogy, set in the present – INCEPTIO, PERFIDITAS and this book, SUCCESSIO – I’m Carina’s social partner and commanding officer, not an easy combination! In the second trilogy – AURELIA (late 1960s), INSURRECTIO and RETALIO (early 1980s) – readers see me as a child in INSURRECTIO and RETALIO. It wasn’t a good childhood. That’s all I’m prepared to say about that time. Oh, and yes, I’m in the novella, CARINA, and ROMA NOVA EXTRA, a short story collection. Carina and I go on a ‘Roman holiday’ with a difference one of the stories!

*Phone rings * Oh, excuse me. I have to take this. *Pause* Of course. *Rings off* Sorry about that. It was the author. She says remember to say all six books in the two trilogies were awarded the BRAG Medallion and her books have the accolade of being Discovered Diamonds. *Rolls eyes*

Q: What is one of your least favourite scenes you appear in?
A: Ah! *Looks away* When I thought Carina was going to chuck me out. What a bloody fool I was. But the next worst was when she had to arrest me for treason, I could see she was dying inside, but she still had the courage to do her duty.

Q: And your favourite scene?
A: Funnily enough, when my daughters came to support me during the trial. They were so brutally funny as only teenagers can be. But the rawest and most emotional scene was in the walled garden with Carina as we prepared to face our nemesis together.

Q: Tell me a little about your author. Has she written any other books?
A:  The Roma Nova series, of course, and she wrote about the intervention of one of Carina’s ancestors to try to stop William of Normandy’s invasion in 1066 Turned Upside Down. Apart from those, she’s written a couple of non-fiction – The 500 Word Writing Buddy and the other historical, Military or Civilians?

Q: Is your author working on anything else at the moment?
A: She’s the sort that’s incredibly driven. She used to be in my line of work, so I’m not surprised. I know she’s developing something new, but typically she’s not saying a word about it.

Q: How do you think authors, such as your author, can be helped or supported by readers or groups? What does your author think is the most useful for her personally?
A: Like Roma Novans, she takes responsibility for her actions. After all, every member of the military I know lives by the maxim that you are only as good as your last job. But she enjoys working with others in task groups and on operations with specific targets. Maintaining contacts with her readers and colleagues is very important to her. She does like a good review!

Helen: Thank you, Legate Mitelus. It was a pleasure talking to you. Would your author like to add a short excerpt and any useful links at the end? But meanwhile, chatting is thirsty work, would you like another beer?

Helen fans herself harder. He really is rather gorgeous! 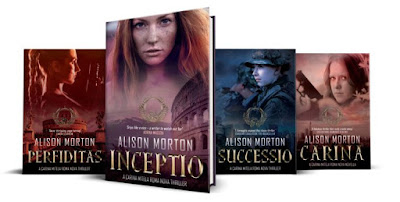 EXCERPT:
(Carina narrates: Conrad has just received a letter from a young British woman claiming to be his daughter. He went out with her mother when he was on a short training secondment in the UK.)

With dark blond hair, shifting copper-brown and green eyes and strong, sculpted lines to his face, Conrad was an attractive man. When he smiled, he was devastating. I’d met him when he was thirty-two, in his prime. It wasn’t merely his face, his athletic body or his fascinating cat-like walk. It was his plentiful charm. At twenty-one, in an English army town full of young soldiers, he would have been the hottest thing in pants.
‘She says she’s my daughter, mine and Janice’s.’ His shoulders slumped and he brought his hands up to support his head. ‘Mars help me if I’ve abandoned a child of mine.’
After a few moments, he stood up, catching the end of his knife and fork which clattered on to the table; the sound echoed through the room.
‘I’ll talk to Uncle Quintus. Perhaps he’ll have some ideas how to deal with this. And he’s the head of my family.’
Quintus Tellus, who’d retired as Imperial Chancellor a few years ago, would no doubt have all kinds of clever advice, but I was unnerved to see Conrad at such a loss. Not a trace of his famous detached decisiveness; his mind was like a bowl of Jell-O. And this reverting to his previous family. My instinct would be to pay this Nicola a little visit and scare the crap out of her. Unfortunately, the letter had bitten straight into Conrad’s Achilles’ heel.
What made him such a good father was his determination that none of his own children would want for love or care. It was an obsession that reached back into his own ruined childhood.

(This article was originally posted as a Novel Conversation on Helen Hollick's Blog ... see below)

Novel Conversations, in conjunction with Indie BRAG appears on Helen Hollick's Blog Let Us Talk of Many Things on the first Friday of every month, showcasing a variety of Indie authors and their characters