The Girl Puzzle: A story of Nellie Bly by Kate Braithwaite 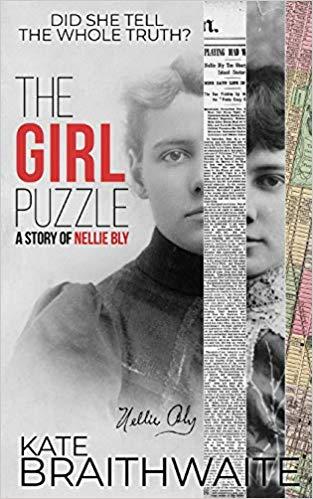 
The cover and title of this novel are worth thinking about before one opens the book itself. The author is telling us that at one level it is historical fiction, a tale told about a past epoch and how people lived then; at another, it is a story of someone’s life but not a biography. It is a story: the author’s interpretation of what happened to Nellie Bly. Who in turn was not only Nellie Bly but Elizabeth Cochrane, a young woman shaped by the lamentable circumstances of her parents’ life – which she is determined to overcome. The puzzle starts here but is quickly forgotten because the author’s lucid prose and excellent characterisation means that one falls into the events of Nellie Bly’s life as if they were happening for the first time now.

Braithwaite has chosen to write about a woman whose published autobiographical work is relatively well known in the USA. This story is told, however, on a dual timeline. Readers new to Nellie Bly’s life know from the start that yes, she overcame the shame and poverty of her childhood, and yes, she became the most celebrated woman in journalism of early twentieth century – and yet they can read each page anxious to know what happened next. This is sophisticated storytelling.

Nellie Bly, now a wealthy woman journalist in late middle age, is living in a New York hotel suite. While she continues with her popular newspaper social commentaries, she is also writing her memoirs. Handwritten chapters are given to Beatrice, one of her secretaries, to type up. In this way, we see Nellie’s first-person account of her life, and also learn what a younger woman thinks about her employer.

Elizabeth/Nellie’s story begins when she is a twenty-year-old anxious to find a job on a New York newspaper and make a name for herself. Down to her last borrowed dime, she accepts a frightening challenge as the condition for obtaining a job: to become an inmate of a mental institution and report on conditions from first-hand experience. Elizabeth Cochrane/Nellie Bly then becomes Nellie Brown, a poor befuddled young woman who has lost her luggage, her family, her home, and her memory. The act is convincing enough to get her into Blackwell’s Island Lunatic Asylum.

Nellie becomes trapped in the vicious treatment regime of a late nineteenth-century mental institution. She is demeaned, ill-treated and controlled day and night by some appallingly cruel nurses. Readers also meet some of the other inmates: gentle but dangerous Tilly Maynard, sad and apparently quite sane Anne, and a number of other rowdier, nastier women who are also subject to the asylum’s institutionalised torture. It makes chilling reading, and I was most disappointed that the one ‘good doctor’ who could have made their lives so much more tolerable turned out to be weak-willed, and ultimately no match for our brave heroine. (More on that would be a spoiler.)

Running alongside this narrative is Beatrice’s observations on Nellie Bly’s informal adoption agency and how the woman becomes besotted with a small girl who has also been the victim of tragic family circumstances. Beatrice is fascinated by her employer, but wise enough to see her flaws – which is how the reader is left to form his/her own judgment.

As I say, this is sophisticated and accomplished story-telling. It is also a timely novel, for while it shows how one determined woman achieved success in what was then in every way a man’s world, that woman was not without her own weaknesses and blinkered vision.

This novel is indeed a Discovered Diamond.