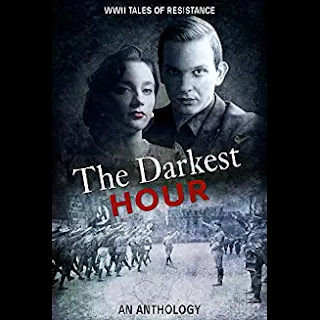 "I suggest having a box of tissues to hand, not always because some of the issues tackled by these brilliant authors are of a difficult, even upsetting, nature, but because the characters are all so vividly real."

"When the world falls to terror and tyranny reigns…how far would you go to resist? Would you risk your own life or the lives of the ones you love?
From a young Jewish woman in love fighting her way out of the Warsaw ghetto, to a Czech assassin rising above his fears for an attempt on a Nazi Hangman’s life, to a daughter who vows to avenge her family by taking down a Japanese commander, and a French boy's touching act of defiance no matter how small. Come and get a glimpse of the invisible side of WWII - the Resistance, those who refuse to bow down to brutality. Hold your breath and hope for the best in the darkest of times, when our heroes and heroines risk all to defy evil so the light of freedom will shine over their countries again."

Recognising some of the authors as those firmly implanted on my ‘Always To Read’ list how could I resist snapping this one up – even though WWII isn’t really my ‘thing’.

Ten different stories set in various countries, from China to Poland, via France Greece, Prague… Each author brings a different slant to the overall theme – that of resistance and the determination to succeed despite the risks and the prospect of unimaginable horrors of punishment if caught.

Although I found some stories to have a slight edge over others, be warned, these authors are good writers and they all have the talent to take the reader right into the story – which means immersing you into the fear and trauma suffered by people who resisted the forces of war-dominated evil.

We meet treachery, endurance, suffering, death – but also hope, pride, bravery and determination. Most of the characters are fictional people doing fictional things based on very real facts, and these are fascinating, deeply engrossing stories that are the sort of tales to stay with you long after each one is finished. I would recommend not hurrying through the book, it is quite a tome with each story deserving its own attention. I suggest having a box of tissues to hand though, not always because some of the issues tackled by these authors are of a difficult, even upsetting, nature, but because the characters are vividly real – I was rooting for every one of them, and yes, shed more than the occasional tear.

Three things struck me while reading: what motivated those people who supported the Nazis and either turned a blind eye or couldn't care less about the suffering to others that they caused? (Was it greed, power, self-preservation, hatred, ignorance, prejudice?), and, worryingly, these dreadful prejudices still exist and in some cases are even gaining momentum. I guess cruelty to others (people and animals) has always been a nasty trait of humankind. And that we (British) forget that it was not only England which went through the terror of a 'blitz'. All food for thought.

These might be fictional people, but boy, does this collection of stories bring it home that there were real, brave, men and women who did their utmost, and paid the final sacrifice, to resist tyranny. As with the Holocaust we must never forget what they did, or tried to do.

Bravo to the authors for reminding us just why we must remember.