In the Shadow of the Enemy by Tania Bayard 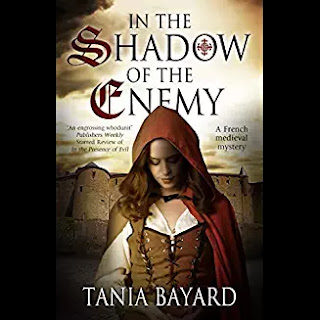 " I love it when real women from history are the stars in fiction in interesting new ways. "

In late-14th-century France, Charles VI “the Mad,” rules. Probably a lot of people would like for France not to be ruled by a guy who is off his rocker, including his brother, the Duke of Orleans. Then, at a masquerade ball, the king and several of his friends decide to cause some mayhem and dress up like wildmen. To do so, they stick fur and leaves to themselves using pitch. This turns out to be a spectacularly bad idea, because a spark, presumably from the Duke of Orleans’s torch, catches on one of their outfits, causing four of the men to burn to death and the king to narrowly escape the same fate. Everyone suspects the Duke.

However, some other people attending, including Christine de Pizan (yes, that Christine de Pizan) see something others didn't - another torch, which was thrown from a spot far away from the Duke’s location. He still had both of his torches and yet there was a third torch on the floor, in the middle of the burning men. The Queen, Isabeau of Bavaria, asks Christine to find out who wants the king dead, for she is certain that he was the target of an attempted assassination. Aided by a colorful array of sidekicks, including a prostitute who actually makes her living at embroidery, a dwarf who works for the Queen, and a deaf girl who takes care of the King’s lions, Christine undertakes an investigation. It leads her from the twisted politics of the court, to various potential targets and culprits with different reasons to want the victims dead, and straight into the sights of a killer.

In the Shadow of the Enemy is actually the second in the Christine de Pizan series, but it was the first one I've read. That made no difference to my utter enjoyment of the book, though, as this story is a standalone. The first book was referenced enough that it filled in any gaps there might have been, sometimes a little too thoroughly - there are totally spoilers for the first book, so I didn’t think that was very well done at all. I’m still going to read the first book, though, and just hope that I’ve forgotten what the spoilers are by the time I actually get around to it.

I adore the fact that Christine de Pizan, author of The Book of the City of Ladies, is the protagonist here. I love it when real women from history are the stars in fiction in interesting new ways. She is a complex character, and all the secondary characters are multifaceted as well.

The mix of medieval attitudes towards people, including those deemed “defective”, such as dwarves or deaf people, and even towards Christine herself, is so realistic.

The research that clearly went into the novel is apparent and appreciated. The imagery brings to life medieval France in an immediate way, from the descriptions of the court and its kitchens and gardens to the streets and their various inhabitants. The plot was pleasingly complex. Overall, this was a fast, fairly light read and I happily recommend it.