A String of Silver Beads by Melissa Addey

A Discovered Diamond
Shortlisted for Book of the Month 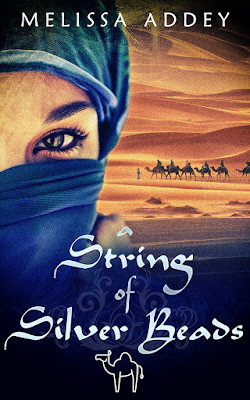 "The skilled writing style means that there is nothing to trip the reader up, no clumsy phrasing or cliche which reminds you that you're reading someone's words. The actual writing moves out of the way and lets you enjoy the story."

Book 2 of a series

A String of Silver Beads is set in the eleventh century, but not the eleventh century with which I'm familiar. This is a distant, far-off land - North Africa - and the opening pages set the scene. We meet Kella as she is about to take part in a camel race, disguised, because as a girl she should not be racing. She travels the land, with her trader father and brothers (her mother is dead) and loves the life. But her wayward attitude is not socially acceptable and her father, a kindly man, decides it would be better if she lived a settled life with her aunt for a while. She meets Amalu, who intends to make his living as a trader, and will marry her and take her with him. This is the escape she's dreamed of, but then life gets complicated. Unconvinced that Amalu will give her the life she craves, and inspired by the soldiers who've ridden in, she decides to run away and fight, again disguised as a boy, but is discovered by the army leader, Yusuf, who initially returns her to her family.

To say more of the plot is difficult without loading this review with spoilers; suffice to say that Kella's life goes in a completely different direction and takes her to a world where she must learn to keep her wits about her, and employ subterfuge in order to stay alive.


I'm not a fan of books written in the first person, and the fact that this tale is told by Kella means that we can't ever look into the minds of Amalu, Yusuf and the other characters who are so pivotal to the story. But this is my only gripe; we do learn a great deal about Kella, and she is a rounded and very believable character.

The sights, sounds, and smells of her world, the customs, beliefs and rituals, are all wonderfully described. There is just enough detail to paint each scene as a picture, without over-loading the pages with too much sensory detail.


At some points I almost forgot that I was reading, as I could so clearly picture Kella making her way through the streets on a quest to find - well, I won't reveal what or who she was looking for. The author has clearly done her historical research - the campaigns of Yusuf and his army are based on real events - but spreads it lightly on the pages.

Relationships develop at a good pace, so that when her slaves show their loyalty to her, we understand completely why they would do this. There are no caricatures here; there are even hints as to why Kella's nemesis behaves as she does. Evil stalks Kella, but the book never tips over into pantomime or melodrama.

The skilled writing style means that there is nothing to trip the reader up, no clumsy phrasing or cliche which reminds you that you're reading someone's words. The actual writing moves out of the way and lets you enjoy the story.

In all, this is an exquisite book and I was sad to read the closing pages. That this says it's Book 2 of a series mattered not one jot - it can easily be read as a standalone. In fact, if the hint at the end refers to Book 1, then I think this might be the better way round to read them.