The Quest for the Crown of Thorns by Cynthia Ripley Miller

A Discovered Diamond
shortlisted for book of the month 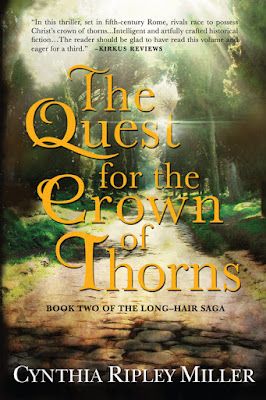 "a well-written piece of historical fiction"

"AD 454. Three years after the Roman victory over Attila the Hun at Catalaunum, Arria Felix and Garic the Frank are married and enjoying life on Garic’s farm in northern Gaul (France). Their happy life is interrupted when a cryptic message arrives from Arria’s father, the esteemed Senator Felix, calling them to Rome. At Arria’s insistence, but against Garic’s better judgment, they leave at once.
On their arrival at Villa Solis, they are confronted with a brutal murder and a dangerous mission. The fate of a profound and sacred object—Christ’s Crown of Thorns—rests in their hands. They must carry the holy relic to the safety of Constantinople, away from a corrupt emperor and old enemies determined to steal it for their own gain. But a greater force arises against them—a secret cult who will commit any atrocity to capture the Crown. All the while, the gruesome murder and the conspiracy behind it haunt Arria’s thoughts.
Arria and Garic’s marital bonds are tested but forged as they partner together to fulfill one of history’s most challenging missions, The Quest for the Crown of Thorns."

One tends to think of the possession of religious relics as a Medieval Catholic obsession so the beginning of this story made me wonder why I had never considered where, if the relics were genuine, they had been hidden or on display during the Roman period after the death of Christ and during the Dark Ages. The story hinges on this: a Roman senator knows where part of one of the most sacred Christian relics, the crown of thorns placed on the head of Jesus Christ at his crucifixion, can be located and entrusts his daughter Arria Felix to convey it to safety in Constantinople. The senator is subsequently murdered and Arria, who is prepared to carry out his request, has additional troubles of her own: a husband, the evil-minded former legate, Drusus, who is supposed to be dead but isn’t – whom she’d much prefer to be dead because she has married his enemy – and her half-sister, Marcella, a freed concubine whose mother is set on gaining recognition and for her own reasons seeks revenge on Arria’s immediate family.

The novel opens with a slave, Malchus, taking possession of the crown of thorns then the narrative sets off at a cracking pace to weave in backstory from the previous novel, the tribulations of the couple Arria and Garic the Frank, and the Roman politics and conditions of the epoch, transporting the reader from Calgary to 5th Century northern Gaul, to Lucca in what is now Tuscany, then along the Appian Way from Rome to Brindisi across the Middle Sea to Constantinople.

Dangers lie at every turn for Arria and Garic. Rivalry, ambition and petty hate, plots and alliances, deceit and deception, plus some very unpleasant people and a religious cult, the Sons and Daughters of Malchus, who want the relic for themselves, which all go to make the Arria’s mission a remarkable adventure. But while the story reads at times like a modern thriller, Ripley Miller also gives the reader period details about customs, lifestyle and housing; the sensory description of meals and garden locations alone suggest a great deal of background reading and investigation. This description adds to the story without intruding, making The Quest for the Crown of Thorns a well-written piece of historical fiction, ideal for readers who enjoy page-turning romances.