The Cup (The Moorish Empire) by Melissa Addey

A Discovered Diamond
shortlisted for Book of the Month 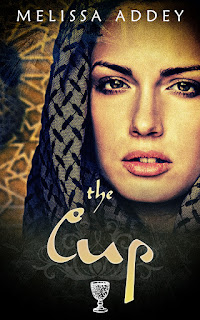 "The main beauty of this novella is Ms Addey’s exquisite writing skill. Her characters walk and talk and behave as do real people"

"The city of Kairouan in Tunisia, 1020. Hela has powers too strong for a child – both to feel the pain of those around her and to heal them. But when she is given a mysterious cup by a slave woman, its powers overtake her life, forcing her into a vow she cannot hope to keep. Trapped by her vow, Hela loses one chance after another to love and be loved. Meanwhile in her household a child is growing into a woman who will become famous throughout the Muslim world. So begins a quartet of historical novels set in Morocco as the Almoravid Dynasty sweeps across Northern Africa and Spain, creating a Muslim Empire that endured for generations."

Set in the exotic location of Tunisia in the early eleventh century, we meet Hela as a child. She is an empath, assisting her father to sell slaves in the slave market by being able to pair the right slave with the right potential owner. Then, one day, an old female slave gives her a cup, and from there on does Hela's life take a turn downhill or uphill - it is somewhat difficult to decide!

Instructed by her mother, Hela becomes a healer, a herbalist, but the cup has powers that can heal or harm, and this is the intrigue of this short novella – is it the herbs, or the cup, or Hela’s own misplaced judgements that then create the events of her life? Is the cup blessed, cursed or simply a wooden cup?

This is not a long or difficult read, and it complements Ms Addey’s other novels in this series - which for many authors is the entire point of the short novella, an introduction to a series. In this case the idea has worked, I will definitely go on to read the others. There are dark undertones in the story, and some scenes that relate to sexual abuse, but they are not ‘over-egged’ or uncomfortable reading, just factual of life.

I was interested in the context of the era - 1020. Having written my own eleventh century novels I found it highly absorbing to visit another country entirely different in lifestyle, religion, place etc., to what was happening in the familiar (to me) 'world' of Anglo-Saxon England. The Cup was a wonderful reminder that other things were happening elsewhere beyond the Viking conquest of England by King Cnut of Denmark.

The main beauty of this novella, however, is Ms Addey’s exquisite writing skill. Her characters walk and talk and behave as do real people, it is hard to remember, at times, that this is a work of fiction. The descriptions, the turns of phrase – marvellous!

The story is as magical as Hela’s wooden cup!