A Discovering Diamonds review of: The Path by Lars Hedbor 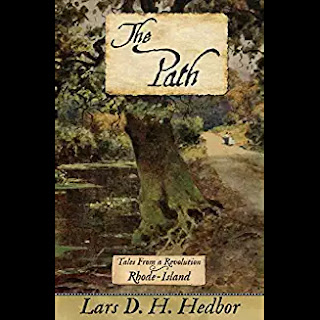 The premise of Lars Hedbor's series, Tales from the Revolution, is interesting and imaginative. The books tell stories about characters involved in the American Revolution, and are set in different parts of the old colony.

The Path is set partly in, or rather on, Rhode Island and the main protagonist is Yves, a French farmer who has decided to enlist in search of a better life, where food will be readily available and the pay will be reliable. He is sad to leave his mother behind, but he feels that this is the right thing to do.

Yves finds himself aboard a ship heading for America, and the journey is rough, with many soldiers suffering from scurvy and some succumbing to worse. Finally landing on American soil, Yves is sent to procure horses for the regiment and whilst negotiating with the farmer who is selling the horses, he meets the slave, Amalie. The next time their paths cross, she is a runaway, and in order to help her, he becomes a deserter.

Lars Hedbor obviously knows the history of this period inside out and back to front. Sometimes his way of setting a scene is sublime, and the opening pages of this book had me hooked instantly, when I felt I was walking along with Yves back to his old home, there to break the news to his mother about his imminent departure. The book is expertly produced with an evocative cover image - I was reading the paperback version - and has been conscientiously edited, with only a slight blip on one page which contains a few typos.

Much of what is in the story is either based on true events, or real people, and this is woven into the story with good effect. The idea of a series of vignettes, each showing different characters at different times and places throughout this conflict is innovative and appealing. Apart from one 'clunk' where the characters move "in synch" the language used is entirely period-appropriate. The characters all speak in a measured, formal way, and I was immersed in their world. At all times they acted and reacted exactly as I would expect people from this era to have done. They do not have modern sensibilities, and those who are resisting their social constraints do so in a fitting, believable way. Costume and custom are authentically recreated and the author leaves the reader feeling confident that all detail is historically correct.

There are a few downsides, however. The story is told entirely from Yves' point of view, which means we learn little about him, and at times this feels constricting. At one point, Yves and Amalie are hiding in a wagon and can't see anything, yet we are told what the wagon driver is doing, as if the narrator can see him. A switch of point of view here would have avoided this snag.


Another character, Thomas, doesn't speak French, so Amalie translates all his speech. Whilst this is obviously what would have been the case in such circumstances, where few settlers would have been bi-lingual, it has the effect of making Thomas a silent character, with all his speech reported. This is a theme which runs through what is a reasonably short book, where many characters explain their back stories, or we are told what happened the day before. With lots of reported speech, and lengthy exposition - such as when an unnamed character arrives as a dinner guest, tells the others about a development in the war, and then leaves -  I felt rather as if I was looking at the story from a distance, and not getting close-up to the action.


When Yves and Amalie are on the run, whilst their escapades are told in great detail, I never felt that they were in any danger. A bit more drama and tension would have been welcome. A character from the voyage asks Yves to do something for him, but this task is left undone, and unmentioned. It may be that the intention here was to demonstrate the futility of such a request, given the circumstances and the dangers of sea travel. Yet it would have been nice to have had this story arc brought to a close, as I kept wondering if Yves would ever manage to fulfil his promise to his friend.


Having said all that, Mr Hedbor has a way of occasionally making you sit up and take notice. A well-aimed shot with a stale loaf of bread had me chuckling out loud. When Yves and Amalie shelter overnight from the rain, I almost felt I was with them - cold, wet and miserable; I could hear the rain plopping on the canvas above them.

There is such merit in the premise of this idea. Some of the books in the series are available as a box set and this would make for a satisfying read. Although The Path is definitely a 'stand alone' story, it might be better read in conjunction with others in the series. I would strongly suggest that the author considers publishing as one or two volumes book of 'short but connected stories', or just promote as a box set of individual stories, as I do feel readers will be a little disappointed to read - and purchase - these  one-by-one.

I enjoyed my time with Yves and Amalie, but I think the brilliance of the idea of the series perhaps hamstrings the author a little; the shortness of the book inevitably gave less time to spend with the characters. I'd have liked to seen them a little earlier in their lives.  So, good story but the marketing/presentation overall needs some thought?