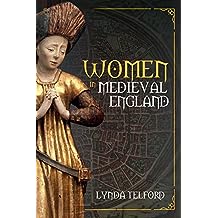 Perhaps I should open this review by quoting a section of the press-release:

"The author starts by contrasting the differences in status between Anglo-Danish or Saxon women with those who fell under the burden of the feudal system imposed by the Normans. She covers such subjects as marriage and childbirth, the rights an responsibilities of wives, separation and divorce, safety and security and the challenges of widowhood."

The first chapter drew me in immediately. 'The Loss of Equality' gives an overview of the status and general lot of pre-Conquest women. I spend my life writing and reading about Anglo-Saxon England, so there were few surprises here for me. The chapter provides a good overview, although it is not reign-specific. However, the author makes good use of the law codes, which is where we find most of the information about the rights of women at this time. There is always something new to ponder, and the author makes a particularly good point, and one which I've not heard mooted before, regarding the changes which came about after 1066. She says that the noble widows, forced to marry new Norman overlords, might at least have had a rudimentary understanding of the language - there were many Normans at the court of Edward the Confessor, who had himself spent many years in Normandy - but the 'peasantry' would not have had any grasp at all of the foreign language. How truly terrifying that must have been.

Of course, the main focus of the book is the fate of women after the Normans took control, and the subsequent chapters contain a wealth of information about how women lived and what was expected of them. Nuggets of information include discussions about what exactly constituted marriage, and the fact that is was not uncommon for two women to claim consummation with the same man.

In Chapter Three we learn of rather unusual, but quite logical, methods of contraception and some rather brutal cures for male impotence, including one which might have worked, but resulted in a crop of nettle stings. Ouch! This is not a 'sensational' book in that sense, however. The horrors of childbirth, while told in unflinching detail, serve only to demonstrate how precarious life was. The legal status of married women is explored in detail, and we learn how much women were supposed to defer to their husbands, and how much and often their husbands could chastise them. (I had not hitherto known the derivation of the phrase 'rule of thumb'.)

Although this is a general history, looking at the plight and situation of women across the social spectrum, it is liberally peppered with examples of individual stories, and is the richer for it. We also learn some interesting specifics: in 1422, women who sold fish were not allowed to oversee the trading in oysters in Queenhithe, London. We also learn of the opportunities which opened up for survivors of the Black Death.

This is a thoroughly researched book, an easy read, but packed full of information. Some of it familiar, but much of it new, certainly to this reader. As with the first chapter, that information is presented in a thematic way, and not reign-specific. Because I not only read about history, but use books for my own study and research, I would have preferred a little more detail about how life changed for women, not only post-Conquest, but in the subsequent centuries covered in this book. In that vein, I would also have preferred a little more information in the notes at the back of the book, where only the names of the source books are given, and not the relevant page numbers. For those wishing to pursue further study, this will be frustrating.

The only other criticism I have is that there are a lot of typos. In a few short pages I found a cluster of them: suferer, efect, efective, and efcacious. I put these down to the publisher, not the author, but a shame all the same a good book marred. I do hope these will be corrected in future editions.

All in all, an accessible book which provides masses of detail in an extremely readable way.