The May Mid-Month Extra with Joan Fallon

One of the nicest things about the internet is that you meet people through social media that you would never normally come across. A while ago I received a contact message through my webpage, from a John D Cressler. He is Schlumberger Chair Professor in Electronics at Georgia Tech in Atlanta. He didn’t want to discuss electronics with me, thankfully, but to tell me that he is also a writer of historical fiction. Not only that, but he too was attracted to Moorish Spain and his trilogy is entitled Anthems of al-Andalus.

I have to admit, I felt both intrigued and annoyed that someone else had written about the historical period I’d carved out as my “own”—many writers have written about Granada but not Córdoba’s Golden Age. In fact, in his second book in the series, ‘Shadows in the Shining City’ he covers the period I write about in all three of my books: ‘The Shining City,’ ‘The Eye of the Falcon’ and ‘The Ring of Flames.’ But as I read it, I felt I was reading something quite new. This is the beauty of historical fiction, it is all down to a combination of interpretation and imagination.


Although 10th century Córdoba was the cultural and educational centre of Europe and at the time its libraries and universities contained 400,000 books, almost all of those have been destroyed and there is very little in the way of written evidence. So interpretation of the remaining facts and a lively imagination to fill in the gaps can be crucial to the resulting story. And that is what has happened with Cressler’s view of 10th century al-Andalus and mine. We are viewing the same historical facts through different eyes.

I remember some time ago that a friend of my husband’s came over to paint the view from our terrace. They both painted the identical view but my husband’s painting was totally different from his friend’s. As in history, the facts were there—the mountains, the sea, the scrubby Spanish countryside—but one painter had emphasised one aspect of the scene and the other something else. The result? Two completely different versions of the same scene. This is what can also happen with historical fiction.

There are certain real characters who by necessity, appear in both Cressler’s book and in mine: the caliph al-Hakem II, his son al-Hisham, his wife Subh and the arch villain, al-Mansur. The names are the same but his version of their personalities is quite distinct to mine and those differences lead to different actions and conclusions. I admit that while reading Cressler’s book I kept muttering to myself: ‘She wouldn’t do that.’ or ‘But he died of natural causes.’ or ‘He wasn’t like that,’ as though I knew these people personally. Of course they have all been dead for over a thousand years, but I feel that I do know them—after all I gave them a new lease of life in my novels. However the truth is that my version of al-Mansur’s rise to power has probably no more truth in it than Cressler’s. I invented a back story for the Queen Subh which was plausible but ultimately stemmed from my imagination. I felt sorry for the boy caliph, al-Hisham II and so made him a more sympathetic character—I wanted my readers to empathise with him not hate him.

When writing a history book, one must keep 100% to the facts—although even there historians are allowed their interpretation of events and motives—but in historical fiction the writer has more scope. Yes, be as accurate as your research will allow, but remember that primarily novelists write to entertain and their characters need to come alive so that the reader can relate to them. We may find reams of information about a historical person or—as in 10th century Spain,—hardly anything at all, but the nature of the protagonist’s character will always be open to interpretation. That’s what makes historical fiction so exciting to read and to write. 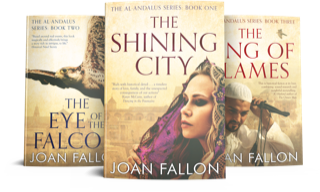 Joan Fallon lives in the south of Spain. She writes both contemporary and historical fiction. Two aspects of Joan's life particularly influence her writing. The first is being a woman who grew up during the sixties and seventies—at a time when it was harder for a woman to gain recognition in a man’s world—consequently almost all her books have a strong female protagonist. The second influence is the fact that she has lived in Spain for the last twenty years. Spanish history and culture fascinate her and have provided some of the exotic settings in her historical novels.

About The Shining City by Joan Fallon

Set in 10th century Spain, in the time of the Moorish occupation, The Shining City is a story of love and honour. Qasim has a secret that only his wife knows. But when his youngest son falls in love with the Caliph’s concubine, he sets off a train of unimaginable consequences and puts all his family in danger. Qasim’s secret past is about to be revealed and all he has worked for destroyed.

Shadows in the Shining City by John D Cressler  http://a.co/4wPoUe5