Diamonds are a Girl’s Best Friend...

...but a string of exquisite pearls is equally enticing
(especially to a conman like Edward)

Excerpts from
Edward, Con Extraordinaire,
and (after sightings in Cairo) from
Sirocco, Storm over Land and Sea,
both by
Inge H. Borg

La Jolla, California: Topographically breathtaking. Financially bountiful.
On that brilliant day in early May, Edward parked his gleaming Jaguar on Silverado Street and strolled down to the Museum of Modern Art, where he zeroed in on a short, sixty-something matron. He doggedly followed the earnest, shape-wear-strapped docent reciting memorized details of bizarre paintings and angular sculptures to sun-seeking Canadians and corn-fed Mid-Westerners secretly longing for lunch and a cold beer on the museum’s outdoor patio. At the end of the tour, Edward smiled his thanks and went out to the terrace with its spectacular view of the craggy Pacific coast. He leaned his tall frame against the balustrade to admire a huge gravity-defying metal sculpture that seemingly sprouted from an upper retaining wall, and waited.
“Pleasure Point, by Nancy Rubins,” a slightly fatigued voice behind him said.
He turned, smiling broadly: “I really enjoyed your lecture,” and then placed his long-fingered hand upon his heart: “As an avid collector of antiquities, I am completely ignorant about modern art. I only wish you had the time to tell me more about this wonderful place.”
“You are English,” she said, as expected, and he introduced himself: “Edward Guernsey-Crock, Antiquities and European Estate Jewelry, at your service.”
She thought for a moment: “Any relations to Ray?” Betsy kept herself carefully informed about the upper crust of La Jolla and Rancho Santa Fe, dead or alive.
”Ray?” Edward’s mind drew a rare blank.
“Ray Kroc! You know? McDonald’s!”
“Oh, good old Ray!” Hamburgers! An American affliction. Quick to grasp a proffered straw though, he whispered in a conspiratorial tone: “You have heard of Guernsey cows. Where do you think all that ground meat comes from?” His voice trailed off as if embarrassed to flaunt his meaty connection to the beef-patty mogul. He doubted the woman knew where and what Guernsey was. To her credit, she put up a stolid front and dropped further inquisition.
“I am Betsy. Betsy Bunting. Well, actually, Mrs. Joseph Bunting.”
After that defining tidbit, he invited her to lunch. With its breathtaking superior view to the museum café, George’s was an infinitely more elegant restaurant where one overlooked the round cliffs of La Jolla Cove from linen-topped window tables. Edward apologized that his car had just been towed to British Motors downtown—a temperamental Jaguar XJ6, if you please—and that he had walked down to the museum from the Village. As expected, she offered to drive the ten blocks north saving him the parking fee, or possibly a ticket on tightly-packed Prospect Avenue.
The burgundy late-model Lexus convertible fitted her as little as did her exquisite too-tight blush-pink St. Johns knit. Edward could at least be sincere to admire the strand of Golden South Sea pearls buried in her short neck. While he complimented her on the pearls, his appreciative eye immediately spied the large yellow diamond in the clasp. Something he did not comment on in case the woman grew suspicious.
She beamed. Her hubby, when he was still well enough to travel, bless him, had bought the earls for her in Tahiti.
“Twelve millimeter. Matched. They cost almost as much as this car,” she sighed, and the ever-astute Edward gathered the Buntings’ to be new-garnered wealth. 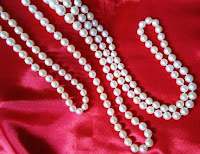 It turned out that Joe Bunting had put down hard-earned monkey-wrench cash on an all-inclusive tour of Cairo and environments. Pyramids, camel rides, Western-style hotel with bottled water, shopping at the Khan Al-Khalili Bazaar, that sort of thing. Then, Southern California’s reigning plumbing contractor had fallen too ill for their planned ‘third-world junket.’ Though he insisted that his wife go and have a good time.
That week, Edward read several guide-books on Egypt and during another sun-drenched lunch with Betsy at an ocean-front in-place called Charley’s, he confided how much he envied her. Oh, how he wished to return to Egypt one more time. If only he could join her group. That way he would have her delightful company, and she a solicitous and knowledgeable companion.
"I just love Cairo and the Giza Plateau," he raved implying familiarity with the sprawling metropolis. “It’s where I got this scar. Fell off a camel, if you can imagine,” he smiled. Then he sighed. How disappointing that his remittance from Lloyd’s of London was held up due to silly exchange-rate fluctuations. “I would love to go back there and show that beast who’s boss.”
After sipping a bit more of her heady Napa Chardonnay, the smitten Mrs. Bunting hit upon a brilliant idea. Would he be willing to take her ill husband’s place on their non-refundable prepaid Egypt tour? In a strictly platonic sense, of course.
That afternoon, the dapper Edward Guernsey-Crock, Esquire, bought a tour guide to Egypt and a pith helmet.

What will lure him more? The woman? Her lovely eyes and slender neck? Or those pearls with the diamond clasp? 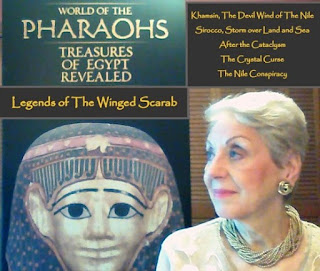 Born and raised in Austria, I left home at eighteen to study languages in London, Paris and Moscow. A job transfer from Vienna to Chicago led to becoming a US citizen. In 1980, I moved to San Diego.
I now live in a quiet lake community in Arkansas where I devotes most of my time to writing.

As a staunch supporter of her Indie-writer colleagues, I frequently highlight their books on my two blogs: devilwinds.blogspot.com, and (for those with pets) on ingehborg.blogspot.com. Check them out for announcements and other musings. 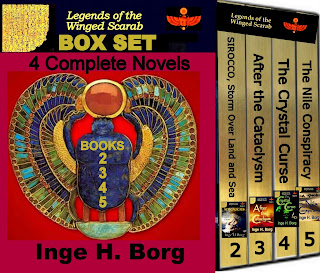 Amazon-US
Amazon-UK
After his dubiously lucrative escapades in and around San Diego, Edward becomes my  protagonists’ nemesis in the present-day action/adventure Books
2-5 of the Legends of The Winged Scarab,
now also available as a 4-Book Box Set - at a ridiculously reduced price.

A thank you to Harriet Doerr by Inge H. Borg