A Thank You TO HELEN HOLLICK

from Helen:
I had no idea about this article, it was drafted by four incredible people while I was away on vacation and done as a complete surprise. I am very touched and extremely honoured.

Anyone who’s read my other blog posts for this site, or knows my story, will know that I have a long-standing and abiding love of history, and of historical novels.

No surprise, then, that on my shelf of ‘keepers’ are several tomes by Helen Hollick. I must have read the first of those books shortly after I had discovered the works of Sharon Penman, and I was impressed to see that Sharon was a friend, and great inspiration to, and supporter of, this new writer.
I was a fan of Penman’s work; massive slabs of historical fiction that kept me in another world for a long time.


Here, in Helen’s The Kingmaking, was another chunky novel, over 600 pages of Arthurian history. Notice I don’t say myth, or legend, because despite the obvious problem of Arthur’s identity or existence, Helen’s skill as a writer meant that never once did this feel like anything other than an historical novel. I loved it. Yes, it was, in a way, the natural follow-on to the Penman books, but this was no carbon copy, or light-weight shadow. Helen had a voice all her own. I was in a hurry to read the next two volumes, Pendragon’s Banner and Shadow of the King.

Again, if you know my story, you will know that my desire to write historical fiction was born during my student days. Not long after I graduated and was living in Cumbria, I was on the phone to my erstwhile tutor, asking where I could research the life of Queen Emma, for it was she who was to be my first subject.


Life got in the way a bit. I married, had three kids … and meanwhile Ms Hollick wrote A Hollow Crown, the story of Queen Emma. (Titled The Forever Queen in the US). Now, let’s leave aside all the obvious ‘snooze, lose’ proverbs. Because here was a story that needed expert handling, and it was much safer in Helen’s capable hands than in my novice, fumbling fingers. It was a masterful telling of a complex woman, put in a unique situation. I then read Helen’s portrayal of the last pre-conquest English king, Harold Godwineson, Harold the King. (Titled I Am the Chosen King in the US).

I was a fan. So far, this is a story of a reader, and a famous author.

Helen, having had tremendous worldwide success with her medieval stories, was let down badly by her agent and publisher. Her idea for a series of pirate novels, for some reason, didn’t excite them.

Helen became a self-published author and her tales of Jesamiah Acorne, the main protagonist of the Sea Witch novels, has become familiar to a vast army of readers who have lapped up his adventures.

This author had nothing to prove, but she’s proven something anyway: indie, and/or self-published books can be as worthy, valid, and frankly as good, as mainstream, traditionally published books. Helen didn’t stop there though. Her involvement with the Historical Novel Society, where she was instrumental in expanding and organising the HNS Indie Reviews and Awards, meant that other indie and self-published authors had the chance to have their books reviewed, and thus reach a wider audience.

And here is where our stories merge. While Helen was busy writing her Sea Witch adventures, I was beginning my writing career. Emma, of course, was lost to me, but I found a new heroine – Æthelflæd, Lady of the Mercians, daughter of Alfred the Great, a woman who ruled an Anglo-Saxon kingdom in all but name. An agent signed me up, and another showed interest. But, for a number of reasons, I decided to self-publish. I’d begun moving in the same social media circles as Helen, and I approached her with regard to having my book reviewed.

She read my book. And where others might have sent me away with a flea in my ear, she kindly explained that it was not formatted to industry standards. I revised the formatting, submitted it for review, and it was nominated for HNS Indie Book of the Year. This simply would not have happened without Helen’s help and advice.

We worked together (I still pinch myself – how did I go from fan to co-author?!) on the 1066 Turned Upside Down project. Helen took a leap of faith with me, trusting me to deliver my piece to standard, and on time.


Then came what I will describe as a ruckus. The HNS decided to rewrite its policy on indie books and whilst I know the details of what was said, and what happened, all I will say is that Helen acted with extreme dignity and professionalism throughout a difficult, upsetting time.

But Helen did not walk away, leaving indie/self-published authors with no outlet, no ‘gate-keeper’ to ensure quality. She set up Discovering Diamonds, a free-to-submit review service for mainly, although not exclusively, indie and self-published historical novels. She assembled a team of admins and reviewers, many of whom came with her from HNS, (which indicates her popularity and esteem within the industry) and continued her tireless and generous support of up and coming authors.

Recently, I blogged about Arthurian novels, and Helen noted that I had a copy of one of her books with a cover which she disliked. A few days later a parcel arrived, from Helen, which contained new, signed versions of her Arthur books, in one of which she had written: “To a good friend and respected author.” The truth is, that without her friendship, support, generosity, and skill as an inspiring author, I couldn’t have done any of it.


Here’s what some other award-winning authors have to say about Helen:

Alison Morton: “Helen is a force of nature. She was the one who gave me the confidence and support to go indie. I was in deep awe of her then, but now we are friends! Passionate that everybody should have a chance, yet fierce (in a good way) about quality, especially editing and a good cover, Helen is the indies’ champion. Under all that energy lies a very kind heart and a genuine willingness to help. But she’s no soft touch and asks that you are professional and polite to her and other people – a good basis for collaboration.”

Anna Belfrage: “I first met Helen in 2012. I was very much a newbie, she definitely wasn't, sitting by a table showcasing her many books. Was I nervous when I approached her? Yes. But I quickly learnt this lady in a hat was generous with her advice, supportive to the extreme - and rather demanding when it came to what she considered quality in writing. Plus she made me laugh. Since then, Helen has become what we in Swedish call a hjärtevän, a friend of the heart. I can count on Helen to tell me the truth about my work - and help me improve it. I know for a fact many indie authors (and others) have been the recipients of her support, thereby daring to set out on the daunting path of self-publishing." 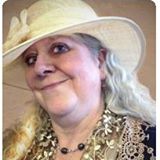 Reviewer Richard Tearle: "I was somewhat in awe of Helen when I first began reviewing. She was an established author and I was a complete novice to any part of the industry. At first it seemed to me that I plagued her with inane questions, but she explained things patiently and I never felt that I was 'bothering' her. Since then we have exchanged many e-mails on a number of matters and I am very proud and privileged to count her as a true friend."

Author, friend, inspiration. Thanks, Helen, for all your words – be they on the printed page, or in an encouraging email, or simply on one of your caption competitions that make us all chuckle!

From Helen:
Well I'm having a bit of a blub here, reading this for the first time - see what happens when you go off on a brief vacation? You come back and figuratively 'gird the loins' (whatever does that expression actually imply? *laugh*,)  to face the mountain of emails in the inbox, and then take a deep breath to catch up with an even bigger mountain of work - only to find this incredible article sitting there (grinning to itself) in the drafts folder!

I am truly stunned and speechless - thank you, Annie, Alison, Anna and Richard, but honestly I have received far more support, encouragement and friendship over the years from wonderful people, like yourselves, than I could ever give in return.

The best thing about being an author is having the great good fortune - and honour - to meet such a variety of genuine, lovely people. Thank you to you all.
HMH.

Richard Tearle does not have a website, but read his article about reviewing here