The Body in the Ice by A J MacKenzie 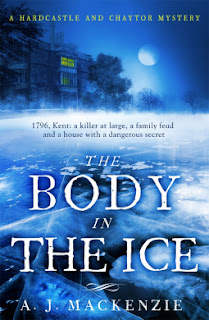 (A Hardcastle and Chaytor Mystery)

The marsh village of Hope had once been a thriving community, but plague has devastated its existence. All that is left is a ruined church – and now at Christrmas-tide, a dead body found in the frozen ice - murdered by a blow to the head. Flickering lanterns illuminate a pool of blood, the jewelled buttons on the corpse’s waistcoat and his expensive watch fob. Found by a boy, was the corpse killed at the old church, or does his death have something to do with the Romney Marsh smugglers?

Justice of the peace for St Mary in the Marsh, the Reverend Hardcastle, has to investigate what is obviously a callous murder, but it seems he has an impossible task ahead of him. His friend, Amelia Chaytor, is there to help him solve the riddle, and along with a new arrival, Captain Edward Austen, it soon becomes apparent that there is more here to solve than was first thought...

The plot of this gripping tale thickens with an American family desperate to take possession of their ancestral home, a French spy, and secrets and revenge all adding to this intriguing mystery.
To say more will spoil a riveting and most exciting read ...

Note: there were a few editing issues with the edition reviewed. Possibly #DDRevs had an ARC  edition though, where errors do often occur prior to full publication.